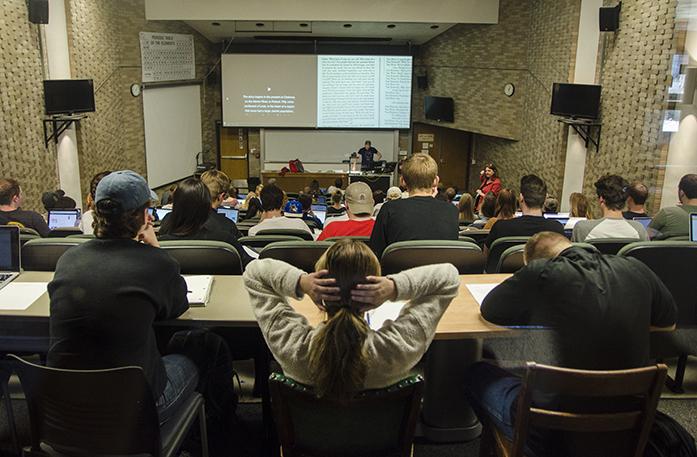 While current University of Iowa students have just recently registered for their spring 2017 courses, university officials are collaborating to schedule classes for the following semester, considering the issues of capacity and student demand in the process.

A report from Ad Astra Information Systems found some colleges face capacity issues based on the way they schedule classes. During peak hours, classroom use at public universities was 70 percent, the report found.

One of the factors officials take into consideration when scheduling classes is the time slots and ensuring the departments offer balance in the times their courses are offered. Houser said the prime times for classes to be offered are Monday through Thursday from 9:30 a.m. to 4:20 p.m., with Tuesdays and Thursdays being the most in demand.

For the fall of 2015, classroom use during peak hours ranged from 63 percent to 81 percent, according to data from the Registrar’s Office.

Departments take the time slots and assign various courses to certain slots, adding up to a total allotted number determined by the Registrar’s Office.

Once the people working in the Registrar’s Office approve the course offerings that are sent to them by individual departments, the UI takes a snapshot of the approved offerings and imports them into Ad Astra’s system.

“From there, then we work the schedule and schedule the rooms out of Ad Astra for the departments,” said Charlene Maher, the UI associate registrar in the division of classroom scheduling.

Figuring out how to allocate course offerings goes beyond figuring out how to best use classroom space, as enrollment and student demand for certain courses and programs must also be considered, said Kathy Hall, the curriculum director for the College of Liberal Arts & Sciences.

Hall said looking at data from Admissions and also understanding past trends in enrollment helps departments understand which courses could be in demand in the future. Key general-education courses will need to be offered, as well as certain courses that are required for completing a major, she said.

“We have so many students with different goals when they come in,” she said. “A student who is majoring in chemistry needs very different courses than a student majoring in English.”

In different majors such as those, Hall said, there were limits on capacity in certain courses, such as lab courses in the chemistry program or more intimate discussion-based classes for a program such as English, where class sizes are tailored to learning outcomes.

“We’re working with people who change their minds,” she said. “It’s not a standardized product. It’s very much individualized.”

Maher said the departments returned to the Registrar’s Office with their course offerings on Sunday. Once this happens, the people in the division of classroom scheduling will work out logistics before publishing the courses in February 2017.

Ad Astra’s report suggested the major problem with scheduling classes was that universities would roll over a master schedule from year to year, but Hall said there is no such master schedule at the UI, and Houser agreed.

“We react with scheduling priorities and scheduling practices that we have to be as attentive to the faculty’s and departments’ needs while at the same time meeting efficiency goals for the university,” she said.