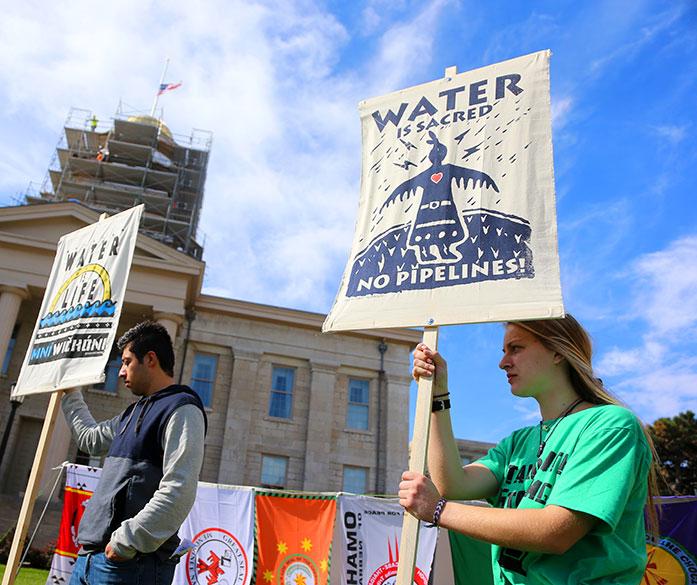 The University of Iowa Student Government reconvened to vote on a resolution on Tuesday that proposed to stand in solidarity with the No Dakota Access Pipeline movement.

However, before the resolution was passed, lots of discussion and debate occurred on what stance UISG would take by passing the proposal and whether taking a stance on the pipeline still allowed the members to remain nonpartisan as a governing body.

“I think this is a nonpartisan issue,” Sen. Sean Finn, who co-wrote the resolution with Sen. Jessica Owens. “It has to do with civil and human rights, water supply, water safety, protecting our environment, and all of those things are essential to our society’s ability to function. Every issue can be politicized because partisans take an issue and create stances on it.

“Because of this, it is impossible for UISG to comment on any greater issue without partisanship being part of that. Our stance is nonpartisan because of our perspective on it from a student standpoint.”

Amendments were made to the resolution before it was passed, including taking out lines that addressed environmental concerns of pipelines in order to make the resolution more focused on supporting the Native American students on campus and the Standing Rock Sioux Tribe, rather than being against pipelines because of concerns about governmental relations. They also amended the resolution to address President-elect Donald Trump.

The resolution was proposed in order to “amplify marginalized voices at the University of Iowa and in this country, and call for the termination of the Dakota Access pipeline,” according to the written resolution document SSR10.

“I am in support of this bill and feel that it is definitely relevant to us [UISG] and the UI community, especially Native students,” Sen. Akash Bhalerao said. “I hope that the Native American students at UI feel affirmed and supported and that this resolution would spread awareness about the #NoDAPL movement.”

The movement is in response to an oil pipeline that is slated to run from North Dakota to Illinois. Some Native American groups have protested the pipeline for its potential to pollute water and to damage sacred lands. These protests have sparked a nationwide movement.

Construction for the pipeline started early this year. The pipeline would carry between 470,000 and 570,000 barrels per day through its 1,200-mile.

The pipeline was originally planned to cross under the Missouri River but because of concerns about potential water supply contamination, it was rerouted to cross the river half a mile upstream of the Standing Rock Sioux Reservation.

The Standing Rock Sioux Tribe has expressed concerns about threats to their water supply and has said the pipeline would disturb cultural, religious, and ancient burial sites. Yet construction of the pipeline was approved by the U.S. Army Corps of Engineers in July.

Since then, movements such as the #NoDAPL movement have been organized to protest the construction of the pipeline.

“The whole idea of oil conglomerates being able to make decisions about Native land is really horrifying,” Owens said, a member of the UI Native American Student Association. “The fact that we aren’t being allowed to make those decisions for ourselves and that we don’t really have a visible voice in America is unsettling.

“You can really see how money holds a lot of power over people because beyond just a race issue, this is a class issue. The communities that will be most affected by the implementation of the DAPL are impoverished.”

Along with UISG passing the bill, 300 students and 29 student organizations endorsed a petition created by Sen. Brody Armstrong that voiced their support of the #NoDAPL movement.

“I think it [the pipeline] is a very complex issue that people try to oversimplify. The fact is that pipelines are one of the safest ways that we have of transporting oil but we also need to reduce our dependency on oil,” Finn said. “At the very least, the pipeline needs to be rerouted so it’s not threatening water supply and sacred land.”