A moment not soon forgotten 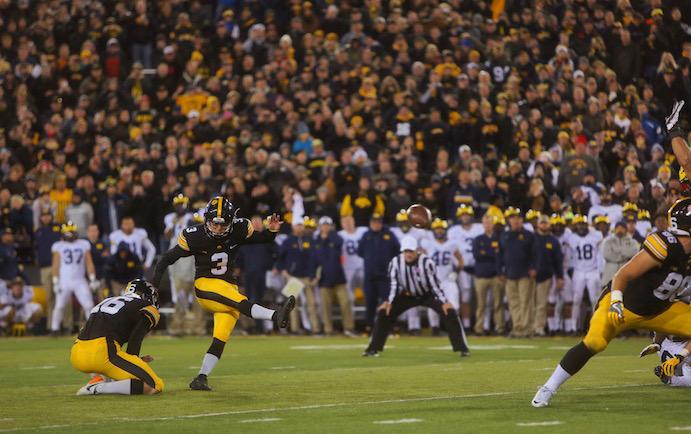 There was a nervous buzzing sound around Kinnick as Iowa placekicker Keith Duncan settled in to attempt a 33-yard field goal.

Michigan head coach Jim Harbaugh decided to call a time-out right before he attempted it, of course, and the entire stadium had a few more seconds to think about it. It was cold, with a bit of wind.

Suddenly — almost jarringly — the ball was snapped. Iowa punter Ron Coluzzi grabbed it, put it down. Duncan’s leg followed through. The football sailed through the air. It went through the uprights.

“I didn’t really know what to do,” Duncan said. “You don’t really practice these things. I was just running, and then I saw the fans. That was pretty cool.”

Duncan was mobbed, his teammates piled on him, and the crowd advanced onto the field, unabated. As the celebration started, a very strange game came to its conclusion.

Iowa’s first points of the evening came in the middle of the second quarter, on a safety. Defensive tackle Jaleel Johnson swallowed up Wolverine running back De’Veon Smith after an excellent punt was downed at the 2-yard line.

The Hawkeyes trailed by 8 and got the ball back, though were not able to do anything with the free possession. After running three plays and only gaining 2 yards, Iowa punted.

Michigan returned the favor just over a minute later, and the Hawkeyes again got the ball back with four minutes remaining in the first half. A 27-yard pass to running back Akrum Wadley set the team up inside the Wolverines’ red zone. The crowd was back in the game.

Then, Wadley caught another pass on a gutsy fourth-down call. A touchdown. All the sudden, it was 10-8 and the crowd was completely invested in the game.

“Once we got that, we just needed to make it a ‘sticky’ game,” Wadley said. “It was a tough, physical fist fight. We had to make it rough on them, didn’t want to give up any easy passes or runs.”

Iowa did not. And a huge amount of credit should rightfully go to the defense. The Hawkeyes were without starting cornerback Greg Mabin. So what did his backup, true freshman Manny Rugamba do? He recorded 4 tackles (2 solo), 0.5 tackle for loss, 1 INT, and 3 pass breakups.

It was his first start.

There hasn’t been a better defensive performance against Michigan all season on a number of different fronts. Linebacker Josey Jewell again had a good game with 8 tackles. Johnson, however, put on a clinic. The senior defensive tackle notched the aforementioned safety, as well as 9 total tackles, a sack, and 2 tackles for a loss.

“[We believed we could win] from the first snap on defense,” Johnson said. “It’s always about having belief. If you have that, odds are — not saying you’re going to win — but odds are you have that belief, you’re never going to stop going hard. First play of the game.”