A taste of ’20s Paris pops up in Peninsula 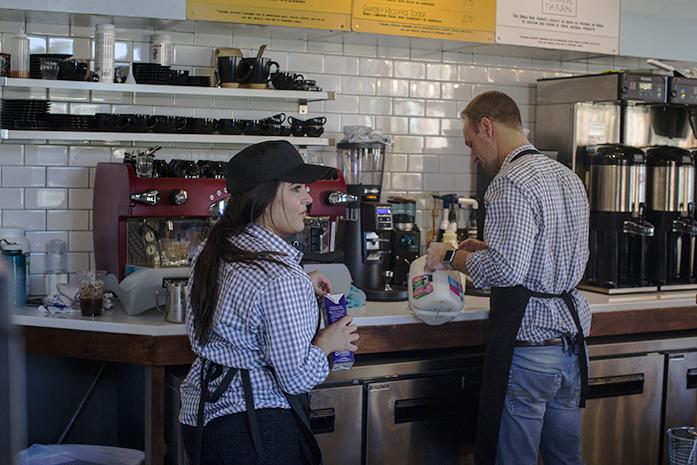 A hub intended for intellectual conversations and exchanging of artistic ideas, a new Iowa City café is emulating the era of the lost generation.

“We are really hoping to be a meeting place for the community, helping to aid in the walkability of the Peninsula Neighborhood,” Kinney said. “If we can serve great food and drink in addition, so much the better.”

The café currently serves fresh coffee from Bow Truss, a roaster from Chicago. The rest of the menu is an assortment of French pastries and items made using ingredients, locally sourced from businesses and farmers.

“I think the menu and what we’re doing with local purveyors is unique. We’re trying to support local farms,” said Zach Stewart, the general manager of the café. “I really like that aspect of it rather than ordering from a national food chain, have them deliver all of our stuff, and serving everybody anything anybody can get at any restaurant.”

The café is decked out with a stylish industrial feel complemented with warmth from the modern brass fixtures, bookshelves, and neat tiling.

The duo channeled writers such as Hemingway and F. Scott Fitzgerald to pay homage to the era and create a fitting community space for the City of Literature.

“The big component we want to stick to is having that community … being a good place to come and talk about art, TV shows, movies, books, anything you’re passionate about,” he said.

Served alongside with its coffee, the café features art from local artists and a free library. Patrons are encouraged to borrow books and bring their own to swap out and share.

“I think there’s a lot of potential, which is what intrigued me. Yes, this is a coffee shop, but there’s so much potential for this to be so much more than that,” he said. “This is a very diverse demographic of people in Iowa City.”

Pretorius and Kinney had just finished their executive M.B.A.s at the University of Iowa when they decided to join forces and open up the café. Pretorius, who has background in real estate, has also been a resident of the Peninsula Neighborhood for five years. Kinney, on the other hand, has had a background in the restaurant business, specifically French cuisine.

Pretorius said the neighborhood has been calling for a café for quite some time now, so the two decided to bring their individual skills and experiences to the table.

The owners said the reception from the public has been positive, and they’re already seeing regulars.

“We molded this place into an awesome, unique coffee shop and the boundaries are pretty much unlimited on what we can do or what we want to do and where we can go from here,” Stewart said.