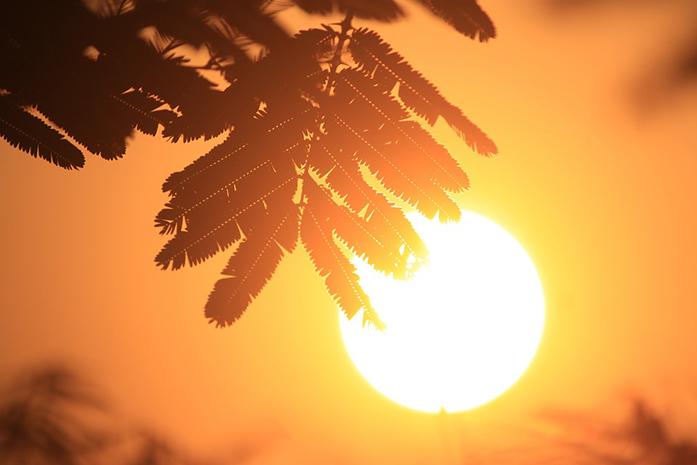 As students flooded the streets and bars of Iowa City the weekend before Halloween, their costumes were not, for once, hidden under bulky coats and thick-knit scarves.

In comparison to the historical average temperatures on these dates, which are highs of 60 and lows of 38 to 39 degrees, Iowa City saw a nearly 15- to 20-degree spike, according to AccuWeather.

As November arrives, frost has yet to set in, and while the overall temperatures have been on a cooling trend throughout October, some have wondered if this heat wave — along with the recent flooding in Cedar Rapids that made national headlines — has anything to do with climate change.

“That’s a tricky thing, right? It’s not proof, but it is compelling,” said Jeffrey Dorale associate professor of Earth and Environmental Sciences at the University of Iowa.

“The warm weather that we’re having now is unusual, but you probably can’t say that it’s directly a function of climate change,” said Jerald Schnoor, co-director of the Center for Global and Regional Environmental Research.

Iowa, Dorale said, has a climate that is already variable, with hot summers and cold winters. Warmer weather overall will be noticeable, and he admitted that while people might see incredibly hot summers as disruptive, they are less likely to complain about warmer winters.

While at first glance warmer fall days and a delay in the first frost appear as blessings, markers of a changing climate will begin to affect the environment in the Midwest and elsewhere, Dorale said.

Annual average temperature increases that scientists have observed will begin to change the distribution and behaviors of animals and plants, which respond to seasonal shifts and climate variation, Dorale said.

People can expect to see an increase in mosquitos that potentially carry dangerous diseases, termites, ticks, and invasive species all migrating here from the south, Dorale said.

Warmer weather also means higher precipitation. According to Schnoor, increased rainfall will play a big role in the changes to daily life one can expect from climate change in Iowa City.

If the current trends continue, Iowans can expect the weather will be warmer and wetter, and increased rainfall will be found in “big events,” or large storms that can cause flooding, Schnoor said.

Gabriele Villarini, an associate professor of civil and environmental engineering, has been conducting research with students on the exact phenomenon of increased rainfall across the Midwest, studying a broad geographical area as far east as Ohio and as far south as Missouri.

What these researchers have found is that flooding events and precipitation have not actually been more extreme, but rather more frequent. This was discovered by comparing historical data recorded from the 1960s onward.

Essentially, rather than larger floods and heavier rainfall over a short period of time, we’re seeing more days of sustained rainfall and storms, and therefore an increased risk of flooding, Villarini said.

Villarini and his research team are now continuing their studies in an attempt to predict how new trends in rainfall can be expected to continue in the future, and whether this can be definitively linked to climate change.

Iowa City will also need to adapt to inevitable, increasing challenges that come along with warmer weather, Schnoor said. This includes protecting against flooding, which can be done by raising roads and improving bridges.

“Other people are going to say, oh, you know, we have variable weather and this is just nothing but that,” Dorale said.

But he thinks deniers of climate change will eventually be unable to avoid facing the real effects of the trends researchers have already recorded.

“People aren’t going to agree on this, but I think, yeah, this is what you can expect climate change to look like,” he said.