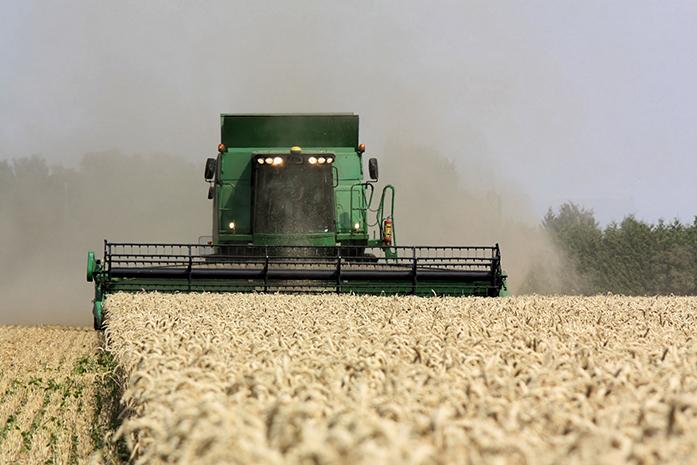 As the harvest season kicks into gear, the University of Iowa College of Public Health has finished its study on how to better protect drivers from accidents involving farm vehicles and equipment.

With the increase of urbanization, the UI College of Public Health has done a study that assess how proper lighting and markings on farm vehicles could avoid incidents on roadways.

Brandi Janssen, a clinical assistant professor of the UI College of Public Health, said she thinks the initial purpose of the study was to understand the effects of state laws regarding farm vehicle lighting and markings.

“We’re trying to figure out, well every state takes a little bit of a different approach to lighting and marking,” Janssen said. “But does that approach have an effect of the number of incidents that happen on the road.”

Marizen Ramirez, an associate professor of the College of Public Health, said the main problems that cause these farm vehicle accidents is because farm equipment travels a lot slower and is bigger than passenger cars, so the size and speed differential are challenges that roadway users have.

“We know that as users of public roadways, particularly during harvest time in Iowa and other states that have some agricultural industry, we will often see farm equipment on roadway,”

Ramirez said, “During harvest time, days are shorter and it is harder to see equipment on the roadways.”

UI student Luis Olivarez an Idaho native, said where he’s from, all the high school kids would get jobs as drivers for farmers during harvest season. He said as long as the students were within 100 miles of the farm they were allowed to drive the vehicles without proper a Commercial Driver License.

“I would drive from the field to their farm or their silos,” Olivarez said. “So the law was I could drive as long as I was in a 100-mile radius, and I couldn’t get on the interstate but I could drive on city roads, country roads and basically everything else.”

Both Olivarez and Ramirez said that it is essential to drive slowly in these vehicles. Olivarez said he had never been in an accident, but he said several tractors tip over from going to fast around turns.

Ramirez said this speed differential is dangerous because as a passenger driver you’re going 60 mph down the road, while tractors and other vehicles are going 20 mph.

For farmers, Ramirez said, traffic incidents involving farm equipment are one of the critical causes of fatalities and injuries. But it is not just a danger to them; the passenger vehicles hitting this farm equipment are also at risk.

“It is actually the other passengers that are at higher risk,” Ramirez said. “They are five times more likely to die than farmers in a crash involving farm equipment.”

Ramirez said one of the things the study tried to do was give a prediction of the number of crashes that could be reduced if the state updated their policy. Stating “if they became much more compliant with the standards that were offered, then based on this analysis, we saw a reduction in the crashes,”

Janssen said the goal of the study was to provide scientific evidence that there is a relationship between these two things. She said in her perspective that is the biggest contribution of the study.

“So that was one of the first objectives, so now that we know that now the question is…. What do we do about it?” Janssen said.