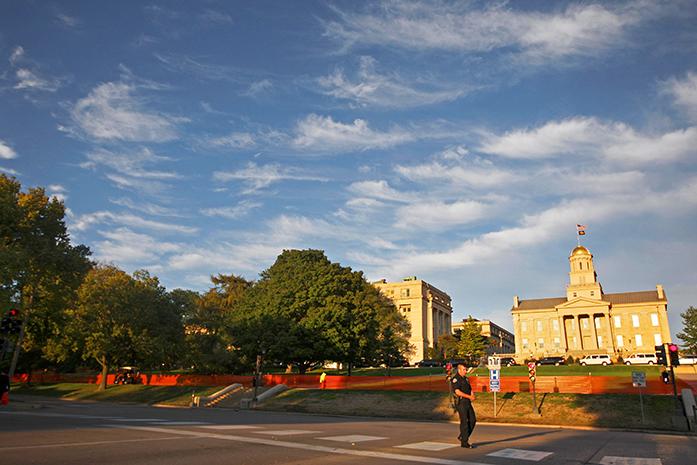 University of Iowa student leaders and members of minority groups are speaking out against the sudden rise of hateful messages around campus.

Fliers featuring racist, anti-Semitic, and homophobic messages have been posted around the UI cultural and resource centers, as well as an unnamed residence hall, in recent weeks.

According to a statement released by the university, the fliers were immediately removed upon discovery and the UI police are investigating the incidents.

“The University of Iowa is … committed to maintaining an environment that recognizes the inherent worth and dignity of every person and that fosters tolerance, sensitivity, understanding, and mutual respect,” said Tom Rocklin, the UI vice president for Student Life, in a statement emailed to The Daily Iowan. “We encourage our campus community to embrace diversity, demonstrate leadership, and be respectful of everyone who uses our shared space.”

The UI Student Government released a statement Monday in response to the fliers that condemned the spread of “hate and intolerance.”

“Acts of this kind, intended to stir up hate and intolerance, have absolutely no place at the University of Iowa and will be investigated by the appropriate law- and policy-enforcement agencies,” the statement from UISG said.

UISG President Rachel Zuckerman said she believes the actions of those who have posted the fliers — acts of “some people with a lot of hate in their hearts” — do not reflect the attitudes of a majority of UI students.

“[The groups of students targeted by the fliers] are supported and loved by myself and so many people on campus, so don’t take the actions of this small minority of people to be representative of how other students on campus feel about them,” she said.

Elliot Smith, a transgender UI student, said he fears a larger population of students holds views similar to those who posted these fliers than the UI community may realize.

“It’s still continuing to pick up ground; this idea that white men are becoming an oppressed class, and I feel like that’s a lot of what’s behind making it OK to post these fliers against other groups,” he said.

Similar but unconnected events occurred at the UI last week when people stood on the T. Anne Cleary walkway to preach homophobic views. Smith said this event, combined with the posting of the fliers, has created a “dark atmosphere” on campus.

“A lot of sort of negative things have been happening all at once,” he said. “I think [these events] are maybe emboldening each other and encouraging other copycats to go ahead with similar things.”

Smith and Zuckerman, as well as UI student Jenny Joaquin, who is a Latina, said they attribute much of the rise in popularity of these ideas to the 2016 election season.

“All these other people that you never realized were supportive of that kind of thinking or those actions to come forth, and then … you realize all those people really support all this … ignorance,” Joaquin said. “Now, I wouldn’t be surprised if it was a large group of people that has those same feelings or was behind this.”

Also alarming to Smith and Joaquin was that the fliers are being posted in locations that are designated safe spaces for minority groups on campus.

While these spaces are intended to encourage dialogue and provide minorities with a place to voice their concerns, Joaquin said, she views these acts as an effort to prevent these groups of students from speaking their minds.

“It’s just like, ‘sit back down; you did enough; you were heard, but learn your place again,’ ” she said.

Zuckerman said if students come across any fliers or vandalism, they should report it to UI police or to the Iowa City police. She said students also have the option to report by downloading Rave Guardian to access the newly released Hawk Watch app.

Although Smith said the UI is taking steps in the right direction by making students aware of resources and ways to report sightings of fliers, university officials need to ensure affected students are empowered to seek support.

“The people who are being targeted are such good people, and such kind, accepting, brave people who dedicate themselves to creating inclusive spaces,” he said. “The fact that people are intentionally targeting those people … is the worst part, [and] to imagine being a person with that much intolerance.”