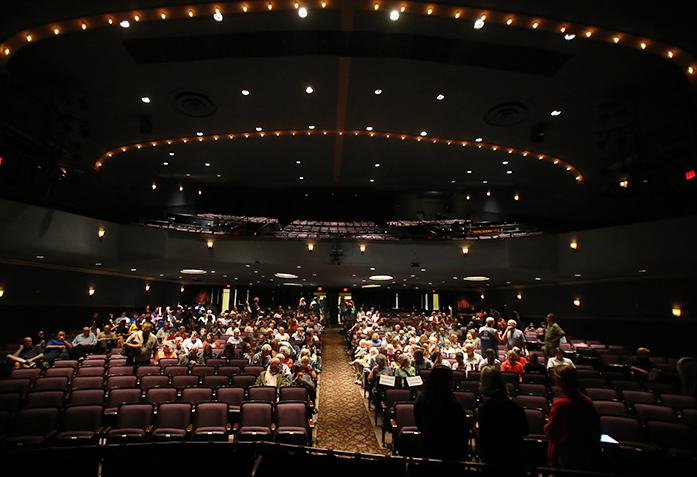 People gather at the Englert Theatre on Monday, October 17, 2016 for the showing of Starving The Beast at 7p.m. Starving The Beast examined the ongoing power struggle on college campuses and in state legislatures across the nation as political and market-oriented forces push to "disrupt and reform" America's historic public universities. (The Daily Iowan/ Alex Kroeze)

The Englert Theater’s screen casted a faint glow on the faces of a diverse audience that gathered to view a film that delved into the issues surrounding the disruption and reformation of America’s public universities.

On Monday night, the Obermann Center for Advanced Studies hosted a showing of the film Starving the Beast: The Battle to Disrupt and Reform America’s Public Universities with a curated conversation that followed the viewing.

The film is a part of a series that the Obermann Center and Public Policy Center are putting on throughout the entire year about the future of higher education.

The film “examines the ongoing power struggle on college campuses and in state legislatures across the nation as political and market-oriented forces push to ‘disrupt and reform’ America’s historic public universities,” according to the Obermann Center website.

“We have to decide what we want higher education to be and it is very tempting to turn higher education into just career training. But as the film makes so clear higher education was really started to produce citizens who could then go on to specialize and learn in their careers,” said Director of the Obermann Center for advanced studies Teresa Mangum.

“If we give away the broad -based liberal-arts education infused with the discoveries from the research sector [of a university], we are going to lose so much. I can’t even attach a value to what we stand to lose,” she said.

A variety of organizations sponsored the event including the Obermann Center, the Public Policy Center, the University of Iowa Graduate Senate, the UI Student Government, the Faculty Senate, the Project on Rhetoric of Inquiry, and UI AAUP, with support from FilmScene.

“When we heard about this opportunity, we thought it would be a great one to support because it is right up our alley when it comes to the issue of higher education funding,” UISG Governmental Relations liaison Andrew Namanny said.

Following the film, audience members were invited to the upstairs of the Englert to discuss their opinions on the film and the value of higher education in a curated conversation.

Sheets of paper were laid out around the room upon which people were invited to write their opinion.

One example of an opinion that was written on one of the sheets was, “As a first generation college graduate, higher ed gave me and my family hope that our lives can change for the better. Higher education has had the biggest impact on my life by shaping my mind in a way it would never have been without the opportunity.”

The hope behind the viewing of this film was to provide viewers with a history of the issues surrounding the disruption and reformation of America’s public universities.

“This film is supposed to raise consciousness and get people in Iowa and across the country to realize that public education is worth paying your taxes for,” UI AAUP member Loren Glass said. “It should be seen as an investment, not as a drain of your income.”

A major issue discussed both in the film and following the viewing was the steeply declining state funding for higher education and quickly increasing rise of tuition at universities.

“It’s just an expectation that you go to college now no matter the cost. We don’t really present the opportunity of trade school or an avenue like that anymore,” Namanny said. “A lot of times we don’t take the time to look into how much student debt are we going to have, how much interest we will have to pay.

“I think that bringing a film like this to students makes them more aware of these kind of issues.”

The issues discussed Monday night both in the film and at the discussion will continue to be looked at as the series continues throughout the year.

“Students deserve to get a decent education without going into debt for the rest of their lives. I really wanted students to have the history [that is provided in the film] so that they can make well- educated arguments for why we all need to take on more responsibility when it comes to public education and its place in society,” Magnum said.