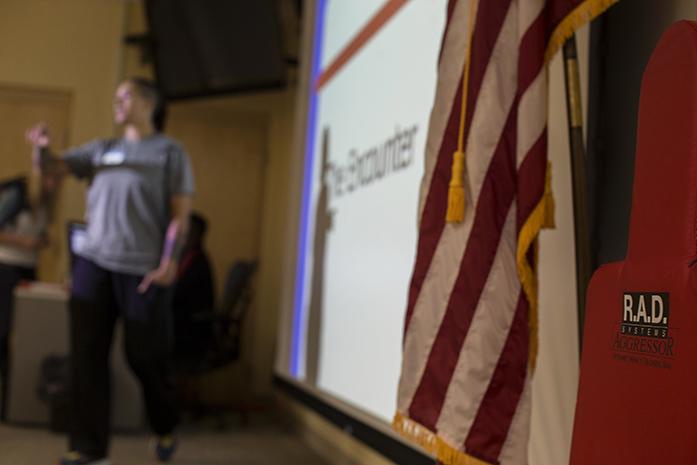 Men learning how to defend themselves is a stigmatized topic in society that needs to be discussed more, officials say.

The importance of self-defense for men on campus is not discussed as much as it is for women, but it should be, officials say.

Alton Poole, the crime-prevention specialist at the University of Iowa police, is an instructor for the Rape Aggression Defense class for women. There is a version of the class meant for men to take, he said, but no one has ever signed up to take the class in his memory.

“I think, in today’s society, men are socialized differently than women,” he said.

Even looking at the gender roles depicted in superhero films, Poole said, exemplifies why men don’t seek help in dangerous situations. In movies, men are constantly saving women, he said, which perhaps causes men to not see the need to learn how to defend themselves.

Poole said men are at risk for sexual assault the same as women are, even if it is at a lower rate. Homosexual men especially are in danger of being sexually assaulted, he said, making the need for awareness even more important in the male community.

While the women’s defense class at the UI police focus more on physical defensive strategies, Poole said, the men’s version of the class hones in on avoiding and escaping in potentially dangerous situations.

By having the men’s defense class specializing in these areas of defense, he said, it could help men in a variety of situations that may not have anything to do with sexual harassment.

The “chemical makeup” of men is different from that of women, Poole said, making men more likely to take risks, such as becoming involved in a chest-bumping contest with another person in a bar.

“It’s important to teach men to de-escalate a situation with words,” he said.

Susan Junis, the assistant director for prevention and outreach for Rape Victim Advocacy Program, said she believes sexual assault and harassment with men is a complicated issue.

“The way masculinity operates in our culture makes men unable to see themselves as a woman,” she said.

Junis said a stigma is prevalent for men in asking for and receiving help in these particular cases, despite the fact sexual assault for men is a danger in society today. While the self-prevention methods do not vary much, she said, an increased feeling of embarrassment and shame exists in men reaching out to others.

While men experience fewer counts of sexual assault than women in general, Junis said, one in 15 men on a college campus will still experience it in some form. Typically, she said, this will occur from the hands of another man.

Overall, Junis said she feels there should be more awareness for sexual assault for men.

UI sophomore Sean Ruecker said he also feels that everyone, regardless of gender, should be educated on the dangers of sexual assault on campus.

While he personally does not feel he has to worry about assault and harassment, Ruecker said he sees and understands the stigma men have in asking for help in these situations. Men, he said, have to worry about being objectified and taken advantage of just the same as women.