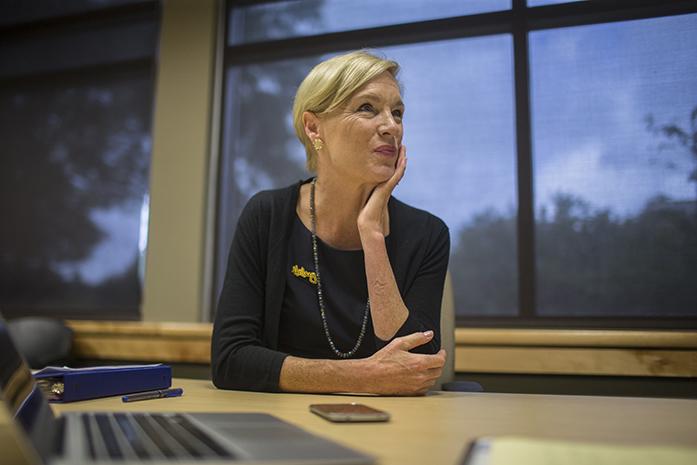 Planned Parenthood CEO Cecile Richards talks with a Daily Iowan reporter in a one-on-one sit down in Adler on Wednesday. Richards has been on the campaign trail for presidential candidate Hillary Clinton. (The Daily Iowan/Margaret Kispert)

Planned Parenthood President Cecile Richards stopped in Iowa City on Wednesday morning to lay out her case for Hillary Clinton.

In a roughly 20-minute speech to voters gathered at the Kirkwood Room in Iowa City, Richards told the history of Planned Parenthood, which will celebrate its 100 year anniversary next week, and warned that the future of women’s reproductive healthcare was on the ballot.

“There has never been a more important political moment” for women’s healthcare, she said.

She also implored voters that Supreme Court justices appointed by a President Trump would be the biggest threat to the 1973 landmark abortion case Roe v. Wade since its decision.

Richards, the daughter of former Texas Gov. Ann Richards, recalled being in the courtroom when the Court struck down Texas abortion restrictions in June.

“Having women’s lived experience in the courtroom that day was crucial to a fair decision,” she said, referring to Justices Sonia Sotomayor, Ruth Bader Ginsberg, and Elena Kagan, who all joined the majority opinion.

Richards spent most of her speech praising Clinton’s record, saying that the former secretary of state has a long history in fighting for women’s issues. As for Clinton’s opponent, GOP presidential candidate Donald Trump, Richards said Trump’s controversial and provocative rhetoric had already done most of the work for her.

“I don’t need to say much about Donald Trump,” she quipped. “I think he’s already said most of it himself.”

She did criticize Trump’s comments calling women “pigs and slobs” and saying that women should be held accountable for having an abortion.

Voters young and old agreed with Richards’ assessment that the long history of women’s healthcare should not be left in the hands of Donald Trump.

Rachel Cron, a sophomore University of Iowa student, called Cecile’s speech “really motivational,” and said she was floored with the stories Richards told about the history of Planned Parenthood.

She also said the event reinforced her belief that Clinton is the best choice for the Oval Office.

“It’s a long history, and we must vote,” she said. “A lot of people have worked very hard, including being put in jail.”

She said this year’s presidential race is especially important because of the GOP’s unusual candidate.

“The Republican this year is not a normal Republican, and it frightens me that he could get in power,” she said.

Tony Currin, an automobile manufacturer in Iowa City and a member of the International Brotherhood of Teamsters, said Planned Parenthood is essential to healthcare access in general. Currin currently works full-time with the lobbying arm of his union.

“I grew up in a place where we had no planned parenthood,” he said. “Not in the dark ages, but in the ghetto there weren’t the resources being brought there.”

Currin added that he trusted the medical products developed from Planned Parenthood’s research more than those from big pharmaceutical companies.

“[The organization] helps with R & D so the pill doesn’t cost a fortune, like it would if GlaxoSmithKline made it,” he said.

Although Richards spoke to a room dominated by pro-choice voters, the division over the abortion issue was not absent from her Iowa City stop.

Sarah McCreary, president of the UI’s Students for Life, a non-partisan student organization that advocates for pro-life stances on abortion, spent the morning picketing Richards’ and Clinton’s pro-choice views on Kirkwood Street outside the campaign stop.

“We don’t support Clinton because she supports abortions through all nine months,” she said.

In a March Democratic Primary town hall sponsored by Fox News, Clinton said that she supported a late term abortion regulation that would have exceptions for the mother’s health.

In an exclusive interview with The Daily Iowan’s Ethics and Politics Initiative, Planned Parenthood president Cecile Richards offered insight on the past, present, and future of women’s healthcare rights and access, as well as the potential effects of 2016 presidential election on her organization and others like it.

The following transcript has been edited for length and clarity. Read the full version online at dailyiowanepi.com

The Daily Iowan: As someone who is an advocate for women’s healthcare, what are some of the biggest things that are on the line in this election?

Cecile Richards: I think one of the biggest things that’s on the line is actually Roe vs. Wade and the Supreme Court. Donald Trump and Mike Pence have said they would appoint justices that would overturn Roe. Mike Pence has a very long career of trying to end safe and legal abortion and Donald Trump has said we should punish women who’ve had abortions, and of course they’ve come out to completely defund Planned Parenthood— which means that millions of folks who count on us for healthcare through public programs could no longer come to Planned Parenthood for preventive care like cancer screenings and family planning. So those issues are certainly on the ballot.

I think at large, when you look at the attitudes that Donald Trump has towards women … what’s on the ballot is the risk of going back to the 1950s for a lot of women and starting over again.

DI: What is Planned Parenthood doing to invest in young people, as you mentioned?

Richards: Some things that we’re doing on the healthcare side are making appointments on mobile phones, providing birth control online, doing the kind of things that help take away barriers for young people. Young people live on their mobile phones, which I think is very exciting. They’re digitally native, and I think it’s so important that Planned Parenthood meet them where they are.

For too many years, certainly for my generation, all issues about sex and sexuality were stigmatized. Abortion was, homosexuality was. And the exciting thing to me now is that young people are telling their stories and they are living out loud. More women are telling their abortion stories, and I told mine.  I think once we get out of the shadows, and I think the LGBT movement has led the way in this, it normalizes what should be an open and honest conversation.

DI: One of biggest Iowa voting blocs is Evangelicals, who are widely seen as pro-life voters. How would you bring these ideas to such a voter?

One is: As a country, people have very deeply felt personal feelings about abortion, and I completely respect that. It isn’t something that can be reduced to some kind of binary, political “pro-life” and “pro-choice.” I think those labels actually don’t even mean anything to people anymore, particularly young people. I think the question gets down to, do you believe the issues around pregnancy, which can be complicated – who is best in a position to make those decisions: a woman in consultation with her doctor and perhaps her faith leader or her partner, her husband, whoever— or should they be made by politicians? It’s incredible how strongly supportive many people of faith are that a woman has to make that decision; that it is not the role of government to be involved in the most personal, private family decisions that people make.

The second is that because of the work that Planned Parenthood has done, and many others, we are now at a thirty-year low for unintended pregnancy in America. We are at a historic low in teenage pregnancy. To me, these are great public health wins, and they happened because we finally got better access to family planning and information to women and young people so that they could be healthy and prevent getting pregnant before they were ready to have a family. There is such uniform support for that, I think across all faith lines.