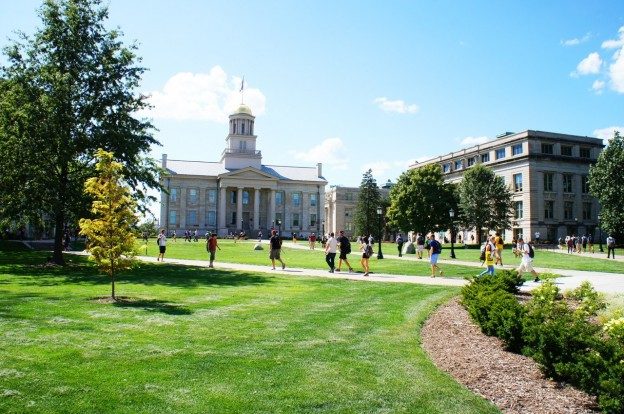 The new home of the University of Iowa College of Pharmacy is set to be finished in 2020 and construction has officially started.

With golden shovels in hand, officials broke ground Thursday afternoon on the brand-new University of Iowa College of Pharmacy facility. The new building will be located on the site of the old Quadrangle Residence Hall, which was demolished this summer, and will be home to pharmacy students by 2020.

Speakers at the ceremony ranged from UI President Bruce Harreld to third year pharmacy student Claire Weidman, all of whom thanked the founders and creators of the new space.

“Many people have brought us to this long-awaited moment for the College of Pharmacy,” said Lynette Marshall, the CEO of the UI Foundation.

The ceremony — attended by faculty, officials, regents, and UI pharmacy students and alumni — took place in front of the grounds where the building will be located.

Students as well as faculty are excited about this new building and the possibilities it holds for their future studies and research.

“I’m actually really excited about it; sadly, I’m going to miss it being open, but I think it’s definitely going to attract more students to the college of pharmacy,” said Jasmine Mangrum, a third-year UI pharmacy student. “I think the building we have now is adequate for now, but class rooms will be more interactive, and students will have more space, because right now, the student orgs don’t have a lot of space.”

Mangrum said she’s excited about the new technology that will come with the new building.

“I’m excited about having outlets in the lecture rooms; right now, we don’t have outlets,” she said. “But in all seriousness I’m excited about the student areas, for the different pods. It’s kind of like how the med students have pods so they can have their own space, because right now we’re all kind of in one room doing a lot of different things.”

The new building will feature state-of-the-art laboratories, community areas, and a total of 23 different learning spaces including classrooms, study rooms, and a team-based learning center that will seat 128 people.

College of Pharmacy Dean Donald Letendre addressed the crowd of people at the event, filled with alumni, faculty, and white-coat-clad students.

“If not for the students … why do we exist?” he told the crowd as he opened his speech.

Letendre said the school is one of the oldest public colleges of pharmacy in the country and the oldest west of the Mississippi River. Letendre, who has worked on the plan since 2007, said he is proud to see the $96.3 million new development become a reality.

“Look out behind me … that’s rebirth,” he said. “That’s an extraordinary moment of birth and rebirth of this college.”