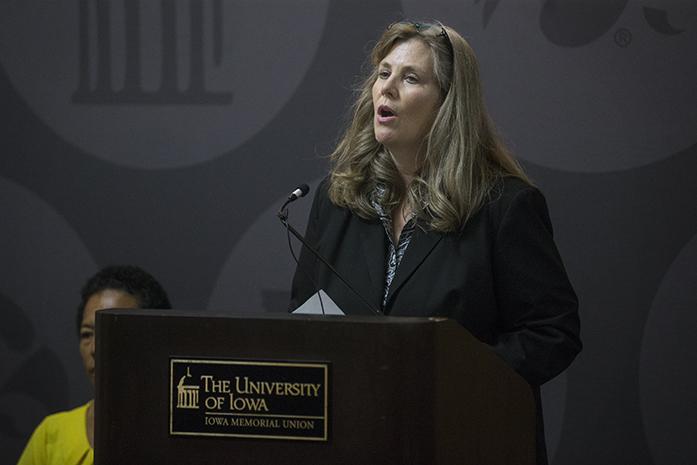 Following a low 9.3 percent response rate to a campus-wide survey regarding sexual misconduct, University of Iowa officials are beginning to re-examine ways to reach students when it comes to these types of issues.

UI officials released key findings of the Speak Out Iowa survey, which was conducted over seven weeks and began in October of last year. The survey results, officials say, have helped them pinpoint the most problematic areas and begin conversations with stakeholders across campus.

Associate Professor Carolyn Hartley, who chaired the subcommittee that selected and administered the survey, emphasized the importance of noting there was only a 9.3 percent response rate. While not necessarily out of the range of what other campuses are getting from these types of surveys, she said, it is still a relatively low number and means different things for the data that were found.

The survey covered sexual misconduct, dating violence, and stalking, as well as sections on perpetrator behavior, alcohol use, mental health, and academic involvement.

Some of the data could not provide conclusions, Hartley said, because of the low response rate.

“We’re being pretty cautious at this point,” she said, stressing that the numbers presented from the survey represent solely the students who participated, not necessarily the entire student body.

UI junior Yunzhi Wang, who is originally from Beijing, said he thinks it’s significant that a small number of students participated because this is such a relevant issue on campus.

Of the students who participated, 75 percent were female and 25 percent were male, also a limitation when interpreting the data because males and minority students were less likely to take part.

The university published a key findings packet, which includes 12 of what they consider to be the most important findings from the survey.

The survey showed that since enrolling at the UI, 21 percent of undergraduate female students who competed the survey reported being raped.

Additionally, of the undergraduate female students who took the survey, 11.4 percent reported being raped their first semester at the UI.

UI officials said it is difficult to compare these numbers with other schools because of the numerous variables.

“The fact of the matter is, the number is horrifying; it’s a scourge in our society,” said Tom Rocklin, the UI vice president for Student Life. “What’s important is that we work to bring that number down. And that’s the benchmark for us. Not where others are, but where we get to.”

Wang also said this is an important distinction.

“Even if it’s only 1 [percent], we should still consider it as a problem,” he said.

Hartley said the survey gives them a number to respond to.

“Moving forward, we really think of this survey as a base line,” she said.

Hartley and her team are now charged with detailing a sustainability plan for future surveys in years to come.

One of the ways they will do this is to scrutinize each section and decide if there are any that can be removed to make the survey shorter to entice more students to spend time taking it. They will also look at different ways of advertising to different student groups around campus, such as international students and graduate students.

One reason the survey results came out Wednesday rather than last spring, as officials had originally expected, was to give the university time to formulate a response, which came in the form of an antiviolence plan.

It will follow a two-year model and focus on three main goals — prevention and education, intervention, and policy.

“Through collaborative efforts, including the six-point plan to combat sexual assault, we’ve made measurable progress, and there’s more work to be done,” Monique DiCarlo, the UI sexual misconduct response coordinator, said at the press conference Wednesday. “And we took the time to have thoughtful conversations.”

UI sophomore Madeline Brennan, who took the survey last year, said in the future she would like to see more people take it so officials know how to provide support.

“This is how the university knows about specific numbers of sexual assaults on campus,” she said. “They use this as a way to know how they can help students who have been assaulted and what programs they should implement to stop this kind of thing. That’s not a lot of people, so I wouldn’t say it fully represents sexual assault here on campus, but I think it does give a good indicator as to how students perceive assault on campus.”