Is this heaven? No, it’s beer 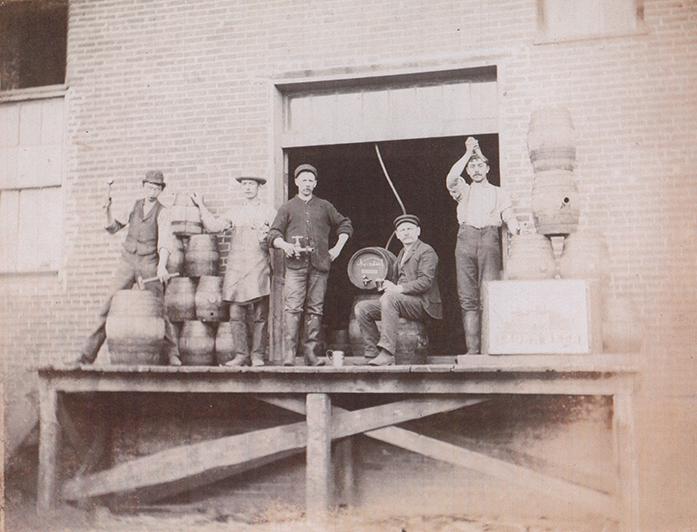 North Side Oktoberfest/Iowa City Brewfest will be held at Iowa City’s historic North Side Marketplace on Saturday; The Daily Iowan explores the city’s long history with beer and brewing.

The roots of brewing in Iowa City run deep.

Located below the sidewalks at the intersection of Market and Linn Streets and the adjacent Brewery Square is a web of underground beer caves, serving as a reminder that Iowa City’s highly involved relationship with beer began long before the Iowa-Iowa State weekend.

The beer caves were initially used during the fermentation process of the three breweries — Union, Great Western, and City, commonly referred to as the “German Beer Mafia” — that used to call Market Street their home.

In those days, to keep the beer cool at a time when refrigerators were new inventions and still priced well outside the budgets of most local bars, beer was stored in the caves, which functioned similarly to root cellars.

While the caves once served a practical function, now they simply serve as a reminder of Iowa City’s long — and ongoing — relationship with beer.

This weekend, people of Iowa City will come together to partake in another beer-oriented tradition: Oktoberfest. Crucially, however, all official celebrations will take place above ground.

The neighborhood has seen a significant increase in economic development in the past decade, with places such as El Banditos, High Ground Café, and the Motley Cow opening their doors, as well as more recent developments such as the Lululemon showroom. The juxtaposition of these newer businesses alongside some of Iowa City’s most famous locales — Hamburg Inn No. 2, Dave’s Fox Head Tavern, and Pagliai’s Pizza, to name a few — caused the North Side to quickly become one of the most exciting and eclectic neighborhoods in town.

Betsy Potter, the director of operations of the Downtown District, noted why the North Side is such an ideal location for Oktoberfest. With “a long history and tradition of beer” in the area, the festival provides a way for the neighborhood to rally around the central facets of the North Side.

The roots of Oktoberfest stretch back hundreds of years and thousands of miles away.

Originally a wedding celebration held to celebrate Crown Prince Ludwig’s marriage to Princess Therese of Saxony-Hildburghausen in a field outside Munich, Oktoberfest’s roots as a festival extend into the 19th century.

But contrary to common lore, the Americanized version of Oktoberfest familiar to Americans today was not, in fact, popularized by the incoming waves of German immigrants at the turn of the century.

Instead, said UI Associate Professor of German and International Studies Glenn Ehrstine, Oktoberfest really took hold in the 1950s and 1960s as a celebration of ethnicity and diversity in the wake of the beginnings of the Civil Rights movement.

“It did not come with immigrants,” Ehrstine said. “All of these American Oktoberfests don’t go back to the immigrants … white cultures wanted to celebrate their own ethnic history.”

Doug Alberhasky, the manager of legendary North Side establishment John’s Grocery and one of the city’s foremost oral historians, said Iowa City was actually one of the first towns in the state to hold a beer festival. At the time, he said, there were no more than a few of these festivals scattered across the country.

Alberhasky credited the North Side Oktoberfest as playing an instrumental role in creating a community of well-educated beer lovers in Iowa City.

“I’ve always pushed less but better drinking,” he said. “The breweries love it. We have some of the best-educated beer lovers in the country here in Iowa City.”

While it’s clear that the community’s passion for fermentation is remaining strong, there was a time when Iowa Citians loved their beer so much they rioted.

After a statewide prohibition law was passed in 1882, there was a two-year gap before the law was implemented, on July, 4 1884. During this time, the owners of the three breweries that once occupied what is now Brewery Square came to a realization: the law made it illegal to sell liquor, but it said nothing about giving it away for free. After exploiting this loophole for a brief period, their success was quickly cut off when the constable caught wind and shut the operation down.

In response, Conrad Graf and Joseph Englert, the owners of Union Brewery and City Brewery, respectively, decided they wanted to send a message to those who would try to interfere with their businesses. In an odd celebration of America’s independence, the two led several mobs to the homes of city prosecutors and alleged informants and threatened to tar and feather them.

Alberhasky said the mob was eventually stopped by an unlikely hero: the wife of one of the men being attacked. However, Alberhasky said, the reason behind her sending them off often comes as a surprise.

“ ‘You’re going to kill my mother,’ ” Alberhasky said, shaking his fist, channeling the famous words of the man’s wife. Ehrstine also confirmed this anecdote, unable to keep from laughing a little himself.

While rioting over prohibition laws may be a thing of the past, local people still love their beer, and this love is set to be put on full display at the North Side Oktoberfest.

This year, more than 50 breweries will be featured at the festival, some of which include 515 Brewing Company, Peace Tree Brewing Co., and New American Brewing Co. John’s Grocery will also début another new beer in honor of this year’s festival.

As Brewfest celebrates its 21st year, it is clear that much has changed since the 1880s and the Beer Riots that went with them. Today, beer is no longer stored in caves deep underground. Even our common conception of a brewery is being upended, as more and more microbreweries pop up in neighborhood garages across the country.

This may be a far cry from the area’s original association with beer, but it is a mark of the times. In many ways, it is exactly this propensity for change that keeps the brewing culture in Iowa City alive and thriving.

Today, the work being done in the beer caves is limited to microscopic analysis and LIDAR mapping, in part carried out by the Office of the State Archaeologist. Nonetheless, the caverns still maintain a symbolic presence beneath the aging brick foundations of the Brewery Square complex, a subterranean cavity preserving a key piece of Iowa City’s brewing history.