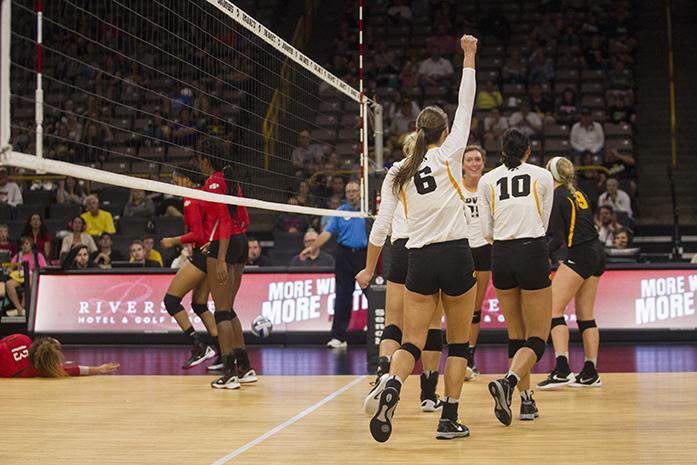 Iowa players celebrate after winning a point during a volleyball match at the Carver Hawkeye Arena in Iowa City on Friday, Sept. 16 , 2016. Iowa defeated Lamar 3-0. (The Daily Iowan/Ting Xuan Tan)

It only took the Iowa volleyball team 12 matches to reach 10 wins, and two more wins over the weekend has it rolling into Big Ten play.

The Hawkeye volleyball team seems to be peaking at just the right time.

Iowa improved to 10-2 on the season after winning the Iowa Invitational Championship in Carver-Hawkeye this past weekend.

Senior Loxley Keala captured the tournament’s MVP honors, and redshirt freshman Meghan Buzzerio was named to the all-tournament team. Keala led the tournament with 76 assists, including 43 against South Dakota, which tied her season high.

This past weekend gave the Hawkeyes a chance to try out different lineups and work out some of their flaws before heading into Big Ten play next week.

Head coach Bond Shymansky was pleased with the Hawkeyes’ work.

“We had a lot of new faces out in the lineup, which is important to us. We keep looking for different things that we can get out of different players,” said Shymansky in a release. “Overall, it was a good night for us to get a sweep.”

In their match against Lamar, the Hawkeyes hit .287 and tallied 41 kills. Lamar had one of its least-efficient games of the season, hitting a meager .010 in the match. None of the Cardinals were able to hit over .125 in the match.

The Cardinals did threaten the Hawkeyes in the third set and had a 17-13 lead at one point. After a time-out, the Hawkeyes caught up with the Cardinals thanks to kills from junior Jess Janota, redshirt sophomore Kasey Reuter, and Keala. The Hawkeyes were able to close out the set (and match) thanks to the late-match heroics from sophomore Reagan Davey. She had 4 kills in the last eight serves to the win the match for the Hawkeyes.

Davey’s performance is another example of the strong rotational depth the Hawkeyes have.

“I knew coming in that my job is to be smart and be able to put the ball,” she said. “I was just focused on being a smart and efficient hitter. That’s something that I’ve been working on.”

South Dakota didn’t fare much better than Lamar; it couldn’t find an answer for the Hawkeyes. The Coyotes hit an abysmal .103 while also getting outpaced by the Hawkeyes in kills (51-30). Hawkeye junior Annika Olsen recorded 15 assists, and senior Lauren Brobst led the Hawkeyes with 11 kills.

Right after beating South Dakota, Shymansky had his eyes on Big Ten play.

“Every contact is going to be important as we head into Big Ten play,” he said. “The margin of error is so small against top-25 teams. Right now, we have eight Big Ten teams in the top-25, including Michigan and Michigan State, who we play on the road this weekend. That’s what we are here for. We’re here for the best-of-the-best each and every night.”

Iowa travels to the Michigan this weekend to take on both Michigan and Michigan State.