This loss might just bug Ferentz for a while 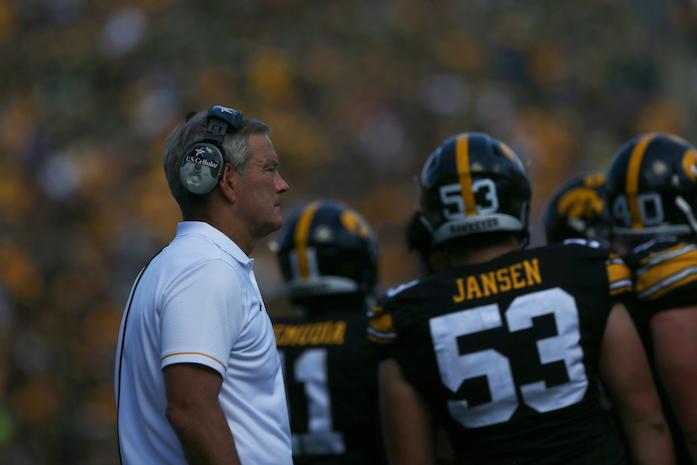 Iowa head coach Kirk Ferentz watches his team during a timeout of the Iowa-NDSU game at Kinnick on Saturday, Sept. 17, 2016. NDSU defeated Iowa in the final seconds of the game with a 37-yard field goal, 23-21. (The Daily Iowan/Margaret Kispert)

“Of all the stats, they held you to 34 net yards for rushing. Could you have imagined even as good as they are that they could do something like that?”

Kirk Ferentz sighed — a small, very subtle one — but it was a tiny sign of frustration and, perhaps, anger boiling underneath about Iowa’s 23-21 loss to North Dakota State on Sept. 17.

He wasn’t mad at the question, or the reporter who asked it, but at the substance of it. Here he was, a celebrated football coach of offensive linemen and efficient rushing offenses, held to negative-7 rushing yards in the second half of a game against a lower-division opponent.

Frustration was probably just the very tip of the various emotions roiling inside.

“Well, yeah, you certainly hope not,” he said. “You can imagine anything with these guys, but you certainly hope that isn’t the case. But I’ll go back to the mistakes. We came out in the second half, hit a big run on them, and got that called back.”

The run Ferentz was referring to was, as a fellow reporter calculated, likely what would have been a 62-yard LeShun Daniels dash that would have put Iowa fewer than 5 yards from North Dakota State’s end zone.

George Kittle was the culprit on the penalty. The tight end hooked the Bison defensive end with his arm, and the ref pulled the flag, calling holding. It was a costly miscue.

Had the play stood, the Hawkeyes would have very likely scored on the possession, increasing a 7-point lead into double digits. Instead, Iowa ended up having to punt.

The Bison marched down the field, scoring a touchdown to even the game at 14.

Certainly, the loss was far from Kittle’s fault alone — there is plenty of responsibility to go around. Even so, it was a disappointing play from the tight end, who ended the day with 5 catches on 8 targets for 110 yards.

But Kittle could not have cared less about his personal achievements after the game. He prides himself as a good run blocker (Pro Football Focus has had him ranked this week as the best blocking TE in the country), and 34 yards on the ground rushing has to be frustrating for him.

“I’m not even thinking about it; I didn’t play well enough in the run game,” Kittle said when asked how he felt about his receptions. “They played with an intensity that we couldn’t match.”

Blocking, however, is a team effort, and the rest of his cohorts along the offensive line struggled as well. Offensive tackle Cole Croston made several mistakes over the course of the game, as did second-time starting center Lucas LeGrand and guard Keegan Render.

False starts were a slight problem, but the biggest issue came in pass protection. The Bison recorded 2 sacks and 2 QB hits. There were other times when Beathard got clobbered as well.

All-in-all, not a pretty day for the unit.

Now, however, the real challenge comes. The Hawkeyes have nine regular-season games on their schedule remaining — their entire Big Ten slate.

“We’re going to watch film on Sunday, learn from it, and move on,” LeGrand said. “We have to get ready for the next game.”