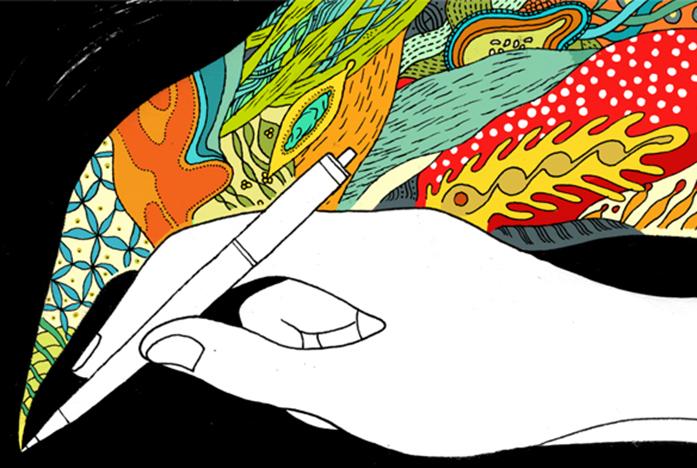 In the wild of the American West, a coyote snatches a baby antelope in its maw, a nighthawk dives toward the ground, unconcerned with the viewer’s alarm. In a Californian vineyard, a mother dies in her daughter’s cabin, workers stain their hands with grapes.

These moments make up the expansive, inquisitive worlds crafted by acclaimed poets Jane Mead (a visiting faculty member of the Iowa Writers’ Workshop) and James Galvin (a Writers’ Workshop faculty member). Together, they will read from their new books — Mead’s World of Made and Unmade, a recent finalist on the National Book Award long list, and Galvin’s Everything We Always Knew Was True— at 8 p.m. today at the Dey House.

Wyoming native and author of seven volumes of poetry — including the critically lauded ecological prose meditation The Meadows —  Galvin returns to familiar landscapes in Everything We Always Knew Was True. The volume delves into the solitude and ruthlessness of the rural American West, attentive not only to the sprawling sky but also to each spider hanging by its gossamer thread.

“All those poems I wrote / About living in the sky / Were wrong. I live on a leaf / Of a fern of frost growing / Up your bedroom window / In forty below,” reads Galvin’s poem “On First Seeing a US Forest Service Aerial Photo of Where I Live.”

His narration watches to understand the land and his place in it.

“Poetry, like any art, is just a way of talking about the things we can’t talk about … I think that people write poetry because they have to,” Galvin said in an interview with Winston Barclay for the University of Iowa’s Spectator. “There are anxieties that can’t be addressed any other way.”

In the World of Made and Unmade, Mead addresses a slow, heartbreaking reality: while the Napa grape vineyard bustles during harvest season —  wagons and workers and scurrying mice — her mother dies of a tumor. The book — succinct in words, deep in feeling — reads as one long poem.

“I had no idea they would be a book-length poem, but I just fell in, and it kept expanding,” Mead said. “A poem that long has time to delineate an entire world … because of the scope of the subject matter, the poem knew it needed to create its world.”

Interwoven with actual dialogue between Mead and her mother, Nancy, the narration is broken only by carefully blank pages. Those empty spaces invoke an urgent curiosity — What actions exist in this absence? What conversations am I missing? —  that reels the reader deeper into her flourishing world.

“Saying you want to die / is one thing …/ but dying is quite another,” reads the opening page.

Almost more than the wrenching imagery, the voice of her mother — pragmatic and introverted — haunts the reader long after closing the book.

“It’s a juxtaposition in the poem, these different stages of life,” Mead said. “There are the people that are working in the harvest, in their prime. There is my mother, who is dying, there are the grapes that are coming in. There is the sense of bounty while at the same death and fall.”

Those lush scenes of harvest — wagons bustling, grape hooks flying — only make the quiet of her mother’s hospice space, a cabin in the vineyard, more poignant.

With every page turn and lyrical insight, her mother becomes more alive to the reader, so when she dies — abrupt but expected, like rainfall — the reader mourns.

But the day after her passing, Mead finishes collecting the harvest. A new cycle of soil and hay begins.

“In the poem, life goes after she dies. There is a sense that life has changed, she’s gone, but it continues; love continues,” Mead said. “There is a looking beyond death that happens. And that is hopeful.”