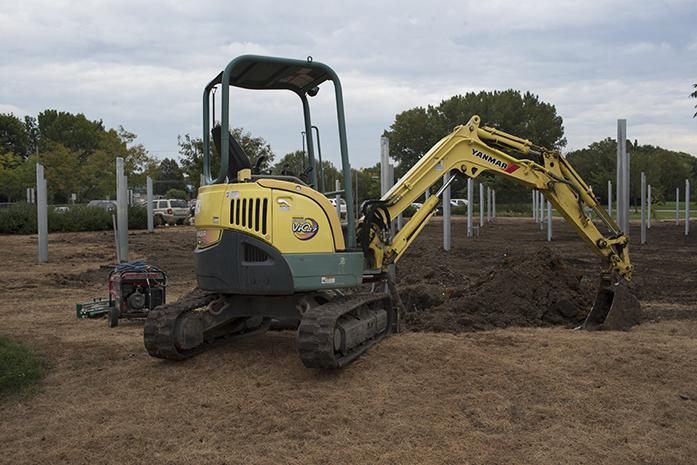 As solar energy grows in Johnson County, members of the county’s sustainability board say they are committed to the cause.

Toward the beginning of 2016, Josh Busard, the county director of planning, development, and sustainability, said his office sent a request to have two solar arrays installed on the Health and Human Services Building and the Administration Building on South Dubuque Street.

“The board decided to meet some of its sustainability requirements,” he said. “[There is] a lot going on in that area [solar energy.]”

One of the arrays is in its respective location on the Human Services facility, and the second array should be set up in the next week, said Larry Steffen, vice president of sales for Eagle Point Solar. The arrays are a combination of solar panels and various wires and technologies, he said, noting the arrays are not running yet but officials were working on the wiring Tuesday.

“Eventually, Johnson County will run on this array,” he said. “Electricity generated from them is free.”

Steffen said work on the county solar project has been a long process.

“We were the winning bidder out of numerous companies,” he said. “The build [is going] quickly — it was the process in front of it.”

Busard said the difficulty of the process was working through all the proposals from county officials.

Despite the lengthy process, which began in May, Steffen said, construction started shortly after the officials completed the contract.

“Johnson County wants to get this done as soon as possible,” he said.

County sustainability coordinator Becky Soglin said the county wants to use taxes to add renewable energy sources to the area.

“[We are] committed to using [county residents’] tax dollars in a responsible way,” she said.

She said these projects are good because they add to the county’s renewable energy.

Busard said he could see more solar arrays in Johnson County’s future. Other clean-energy projects, he said, will take place at the same location as the solar project.

On the south side of the County Administration Building, a soil compost project is underway, which Busard said will filter storm water and aerate the soil.

He said the solar project is being funded by a power purchase agreement. Because Johnson County is a local government, Busard said, it cannot gain benefits from tax credits — which is why Steffen said a third party entity [Eagle Point Solar] paid for the arrays.

Steffen said Johnson County will eventually own the array — and that will generate free electricity for the county.

“[There is] no significant cost to Iowa City,” he said.

Busard said Eagle Point Solar will own both arrays for up to 20 years, but if the numbers work out, the county could own the arrays in 10 years.

“Even if we see zero cost savings, we still break absolutely even,” he said.