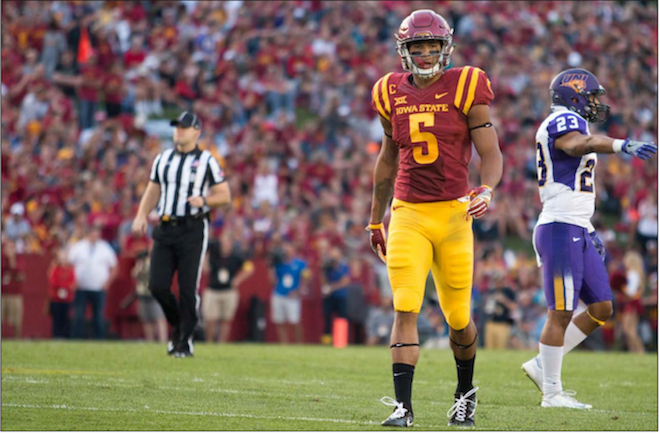 Standing at 6-5, 223 pounds, he’s a massive force to deal with. When asked about him, Hawkeye coach Kirk Ferentz went to the deadpan game plan.

“Well, where do you want to start? He’s got great size, great athleticism,” he said. “I don’t want to pretend to be an expert, but it seems like he grows with every step. He’s just an outstanding football player.”

Lazard is hard to match up with, for a variety of reasons. First and most obvious is his frame. Lazard isn’t skinny, and he has gained nearly 20 pounds during his time with the Cyclones.

His leaping ability is good, as are his ball skills. He’s not exactly a burner, but there is speed in his game, which translates to his route running ability. Fairly polished in that aspect, he is often open, but then one of his biggest issues comes into play — the throw from the quarterback itself.

Iowa State quarterback Joel Lanning is not particularly good. Many of his balls are underthrown, and he has been known to make some extremely poor decisions on occasion. His completion percentage (55) was near the bottom of the Big 12 last year, and in games against good-to-decent defenses, Lanning struggled.

It has to be frustrating for Lazard, who would probably be making quite a bit more noise nationally if he had a consistent quarterback making plays. However, he has been able to make do with the players who have thrown to him, and he has excelled.

“Tough to defend, when you have that kind of size, ability, attitude — all those kind of things,” Ferentz said. “He’s just a really productive, tough guy. The size is a great advantage. It’s tough to simulate that.”

Lazard has been solid in his previous two games against Iowa, grabbing 5 receptions for 53 yards as a freshman in 2014 and then 7 for 73 yards last season. He hasn’t scored a touchdown against the Hawkeyes, but he’s still a dangerous weapon.

Just last week Lazard went off against Northern Iowa, scoring an incredible touchdown in the closing minutes of the game and gained 129 yards on 6 catches. Iowa State didn’t win, but it just showcased the continued growth of Lazard.

Certainly, no one on the Hawkeyes roster is taking him lightly.

It’s a huge test for the Iowa secondary — really, the defense as a whole — for a variety of reasons. Lanning is a dual threat quarterback and has a talent for running the ball, so the defense can’t get caught turning tail and running with Lazard every play.

Iowa State sophomore running back Mike Warren broke out last year, rushing for more than 1,300 yards. There’s a lot to watch out for and a lot of potential things to get sucked in by.

“They have a lot of weapons,” defensive end Anthony Nelson said. “They’re pretty solid all around on offense, and it’s going to be a good test and a tough test for us on defense.”

Shutting down Lazard won’t be something the secondary will be able to do by itself. The Hawks will have to put pressure on Lanning to force him into bad throws, and they can’t allow the running game to get going.

Iowa isn’t going to want to add extra defenders in the box, putting Desmond King — who will likely draw Lazard the entire game — on an island. The receiver is the type of player to make defenses really think about what they want to do and in a rivalry game, there’s little room for error.

From a scheming perspective, it will be interesting to watch if Iowa State head coach Matt Campbell tries to figure out a way to get him off King, or if he’ll let the matchup play itself out.

Iowa’s other corner, Greg Mabin, struggled a bit in Iowa’s previous game against Miami (Ohio) and could be a matchup to watch. Regardless, the winner of Iowa’s secondary versus Lazard could very well decide the game.

“He’s always where he needs to be,” Mabin said. “He’s going to be a challenge this week.”