Not so ‘Iowa Nice’ 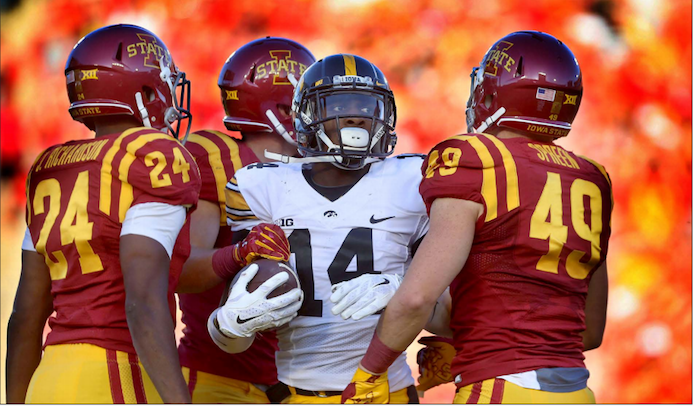 Iowa defensive back Desmond King stands in a crowd of Iowa State players after a punt return in Jack Trice Stadium on Sept. 12, 2015. The Hawkeyes defeated the Cyclones, 31-17. (The Daily Iowan/File Photo)

Traditional etiquette doesn’t apply when the Hawkeyes and Cyclones get together on the gridiron.

It’s a funny thing, how unabashed folks from Iowa are for just that — being from the state known for corn by most and for potatoes by those who wouldn’t be able to point out “the land between two rivers” on a map.

There is a togetherness among the people who are born and raised in Iowa. Iowans love Iowans because they know what they stand for, which is to say they don’t mind getting their hands dirty to get a job done.

The football game between the University of Iowa and Iowa State University, which has been played off and on since 1894 and every year since 1977, showcases how closely knit the state is as a whole and how much the game played on the field splits the state down the middle.

There is a connection among the people of Iowa, whether they grew up here or moved here to make a living and start a family. Iowans, both native and captive, love that unspoken connection. But you are either a Hawkeye or a Cyclone, and you must choose. The Iowa-Iowa State football game is the biggest day of the year in the state — bigger than caucus night and bigger than Saturday night on the grandstand at the State Fair.

In even numbered years, all eyes are drawn towards Iowa City, and in odd years, Ames, to see which fan base will earn bragging rights for a whole year — through harvests, first frosts, dead of winter, and the green of spring.

The state that comes closer together every time it is the butt of a joke in the national light tears itself apart when Black and Gold hit Cardinal and Gold on the gridiron.

For the out-of-state players who grow up hearing nothing about the state but how Iowa feeds the entire country with its crop production, it’s eye-opening to see nearly 100,000 people come together on gameday to watch which team will earn bragging rights.

“It’s wild. It’s something I’ve never really personally experienced before,” said LeShun Daniels Jr., a running back from Warren, Ohio. “Obviously, growing up in Ohio, everything is Ohio State versus Michigan, but coming here, it’s a totally different experience with the hype around the game. All of the Iowa fans are always trying to say it’s a Hawkeye State, and obviously, the Cyclones don’t like that kind of stuff.”

All the out-of-state athletes are coached up on rivalry games. The players on the Hawkeye roster from Texas and Florida aren’t necessarily going to feel a burning hate toward the Cyclones, Gophers, or Cornhuskers the minute they put on a Hawkeye helmet, so it takes some time.

But even for Daniels, there’s something different about the Iowa State game compared with the three other trophy games Iowa plays.

“With it being an in-state rivalry, I think it really amps up the game a lot more because you obviously want bragging rights over the state and over the trophy,” he said. “Being an out-of-state student, coming here and learning more about the Iowa-Iowa State rivalry, it’s really been an interesting time over the past few years.”

There are no major professional sports in Iowa. Iowa and Iowa State, to the people of Iowa who wake up at 6 a.m. every gameday to fill a cooler full of Busch Light and ice, are the “professional” teams to watch. C.J. Beathard is to fans in Iowa what Aaron Rodgers is in Wisconsin, and Allen Lazard is to Iowa State what Julio Jones is to the state of Georgia.

It’s like this now, and it has been like this for a long time. From Chuck Long to Seneca Wallace to Tyler Sash and Joey Woody, the players who have shone against their rival in-state school become the brightest stars in the state.

For the players on each roster who grew up in the state and grew up around the rivalry, it’s second nature to have the blood boil and the hair stick up on the back of their necks a little more when the state ascends on either Iowa City or Ames when the Cy-Hawk Series renews.

“You grow up with your friends who are Iowa State fans, and I was an Iowa fan,” Webster City, Iowa, native Boone Myers said. “So you grow up doing the trash talking. You’re definitely getting up and getting ready for this game if you’re an Iowa kid playing in this game.”

Nearly 100 players from the state have roster spots for either Iowa or Iowa State — 51 for the Hawkeyes and 41 for the Cyclones. Almost every single one of them grew up hoping to play in the rivalry game, but not all of them agree on what colors they wanted to wear on their chest.

“It’s always been a dream of mine to be a Cyclone,” Iowa State wide receiver Trever Ryen said. “My dad was actually a Hawkeye fan, though. So sometimes I would root for them … He’s 110 percent a Cyclone fan now, though.”

Drake Kulick and Brady Ross, both converted-linebackers-turned fullbacks from Muscatine and Humboldt, respectively, echoed each other when talking about the game.

Both grew up as Hawkeye fans in rural Iowa, and both are excited to get their first taste of the rivalry game they grew up watching with a home crowd in Kinnick Stadium.

“It’s certainly pretty cool [to play in this game],” Kulick said. “I’m really going to like getting into Kinnick and seeing how electric the fans are. These Iowa-Iowa State games, the atmosphere is always awesome.”

Kulick admitted this isn’t a normal game week for him and the rest of his in-state teammates, but that the Cyclones are coming to town this weekend — along with the rest of the state — can’t be a distraction.

“I’m not going to say it’s just any other game, but it’s not the Super Bowl, either,” he said. “We have to treat it like we’re lining up like any other Saturday and make sure we don’t get too in over our heads thinking about the rivalry.”

The game does take on a bit of a different feel for the out-of-state players however, as Daniels noted.

This rivalry has to be adopted by them at an older age. It’s almost like learning a new language — the Iowa-born players, who started living the rivalry at a young age, pick it up pretty easily. But the out-of-state players require more teaching.

If the talks Iowa head coach Kirk Ferentz gives in team meetings about the rivalry aren’t enough to get the out-of-state players in the loop, the excitement the in-state players exude during the week is.

“I know for sure there are a handful of in-state guys that obviously want to go and kick the crap out of Iowa State. They’re from Iowa, and they know it’s a big deal,” Daniels said. “Everyone knows it’s a big deal. You’re playing for a trophy, you’re playing for state bragging rights, so there are plenty of people who get hyped up about it. Not just the in-state kids, the out-of-state kids as well.”

On paper, the game would seem to lean toward the Hawkeyes kicking the crap out of the Cyclones. The Hawks are coming off a game against Miami (Ohio) in which they were able to take their feet off the gas a bit after the first quarter, and the Cyclones are 0-1 after a loss to Football Championship Subdivision opponent Northern Iowa.

But that’s rarely how it goes in this rivalry game. The playing field seems to level out when you pit rival fan bases, old teammates, and family members against each other.

“Really, what it gets down to is who plays the best on that given day. That’s the challenge that’s ahead of us right now.”