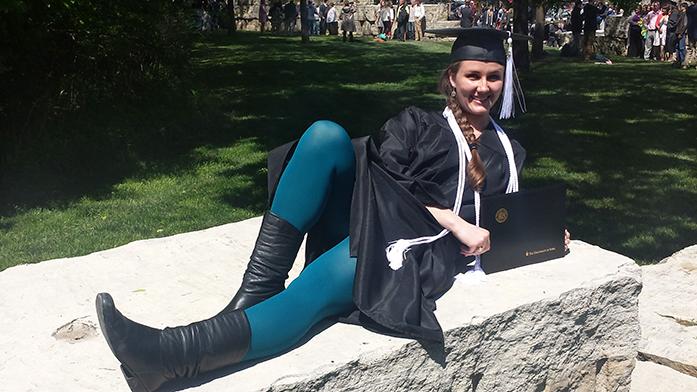 Nathalie Halcrow’s parents knew their daughter would excel in school when she finished an entire week’s worth of homework on the first day of the first grade.

“We thought she would get a packet every day to play with,” said mother Héléne Halcrow. “Obviously, we were mistaken.”

Nathalie Halcrow has yet to slow down. She graduated last spring from the University of Iowa with two degrees, B.A.s in English and French, both with Honors. It took her only three years.

Her academic pursuits coupled with her time spent working as a tutor at the UI and volunteering with the Kirkwood Learning Center made her a standout applicant for the Fulbright Scholarship. Halcrow had never heard of the Fulbright program until one of her professors recommended that she apply.

“It sounded like a dream come true,” she said. “Why would you not want someone to pay for you to go travel for a year?”

The Fulbright application process is famously demanding, and the UI outlines steps starting a year before the application is due. Although Halcrow said she jumped for joy when she found out she was awarded the scholarship, finishing the application itself felt like a huge accomplishment.

“It was really exciting to get it all done, to put on the finishing touches,” she said. “You know you’ve tackled it from all angles.”

Starting in September, she will continue her academic journey in Côte d’Ivoire, helping create lesson plans and teaching English to high-school students in Abidjan, a primarily French-speaking city.

Halcrow has French and American citizenship and grew up traveling, so, her mother said she is used to interacting with other cultures.

“Being outside the U.S. is the thing that will be the most jarring, but it’s not what I’m most worried about,” she said. “Most of the things that concern me are things I can’t control; what’s the best way to get around the city, how about grabbing a taxi, what’s the price of a mango?”

Fulbright recipients are expected to be involved in the community, and Halcrow hopes to start a creative-writing group that infuses both the cultural tradition of oral history and the creative aspect of writing.

Lena Hill, a UI associate professor of English and African American studies, first had Halcrow as a student in 2014 and was her thesis adviser during the past year. Hill said Halcrow stood out as a student, eager to learn and engage classmates.

“I saw both her independence and genuine curiosity, as well as her aptitude,” Hill said. “Sometimes, you get students who are very good at being students, they know how to make good grades, but they don’t have the same authentic investment in learning new things.”

Hill is confident Halcrow will be both personally successful and an ambassador for the UI English Department.

“Taking the initiative to apply for Fulbright really represents what the [English Department] value in our students, and that is taking what you’re learning in the classroom to more fully engage the world around you and to think of yourself really as a global citizen,” Hill said. “Nathalie really encapsulates that.”