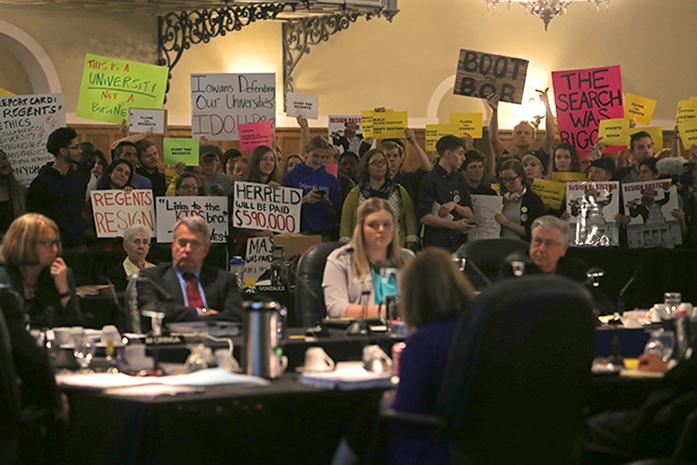 The University of Iowa doesn’t teach you everything. When it comes to higher-education, the average classroom leaves out its own surroundings: our laws, our legislators, our governing bodies, and Terry Branstad’s 30-year death grip on the Iowa governor’s office.

It’s partially understandable; not everyone goes to school for political science or law. But it’s hard not to wonder about the laundry list of decisions the state Board of Regents has made about our education at the UI, because its decisions have directly affected all of us (unless you’re as rich as the regents, or you have woefully accepted an endless pit of student debt).

The regents have numerous responsibilities when it comes to our public university: raising tuition, approving budgets, creating the five-year strategic plans (with a new one coming this fall), doubling as the Board of Trustees for the UI Hospitals and Clinics (to quote Bruce Harreld’s first public forum PowerPoint: “????”), and conducting efficiency reviews that juxtapose their alleged claims of “scarcity” (March 2014 headline from the Gazette, “Iowa regents choose consultant for efficiency review, spend $2.5 million: Study seeks to identify ways to maximize scarce resources, find new efficiencies, seek out collaboration”).

In essence, the regents make the decisions for our university, monetarily or otherwise. When the regents spend $2.5 million on an “efficiency review,” they force us to pay more; we needed approximately $3.5 million to avoid a tuition hike for 26,000 undergraduate students this year. What did we learn from this private review if it was so important and expensive?

When we attend a school that stays so incredibly far away from its own self-understanding, we ought to question the unsettling, behind-the-scene actors. Who are they? The answer: largely rich corporation owners or corporate board members. In addition to this, eight out of nine regents are affiliated with the Republican Party, yet they promise to remain bipartisan. What other false promises do they make?

Regent Mary Andringa, one of the regents who appointed Harreld, recently resigned after winning a UIHC furniture contract worth more than $5 million (according to Jeff Lewis, the rival furniture bidder [Press-Citizen]). She did not initially report that she was a board member for Herman-Miller even though she received more than $140,000 from it in one calendar year. All in all, she got the UI to generate profit for Herman-Miller without any public dissent.

This is just one example of regent corruption (read more at ditchwalk.com or bleedingheartland.com), and with UI President Harreld looking for private stakeholders, what should we expect next? What else is already going on that we aren’t aware of because of their “private sessions”? Corrupt activity should be expected from regents who have a long history of insider activity and a complete lack of transparency. Their “transparency meetings” consist of a camera in a room, with no regents present. This occurs every month or so, with no plans of humanization.

Prospective students search for good classes, good food, and good student organizations before coming to Iowa City, not “regents corruption.” They shouldn’t have to. And if they’ve looked at an Iowa state quarter recently, its shiny back states, “Foundation in Education,” which sounds great and looks permanent on metal pence, but our bureaucracies’ goodwill is clearly not solidified in the same way. To achieve a remote sense of checks and balances, we must enact a democratically elected regents, and they must be fully transparent.

We tend to trust our educational bureaucracies because they are supposed to have our best interests in mind, but when you look into the regents, “best interest” seems to be something only reserved for themselves and their corporations.

The Iowa Open Records Law isn’t being enforced, and if the court system finds this law insufficient through the current lawsuit against the regents, then we need something stronger, because without laws in place, we are going to see more Andringa-like scandals in our future, without a proper method to seek justice.