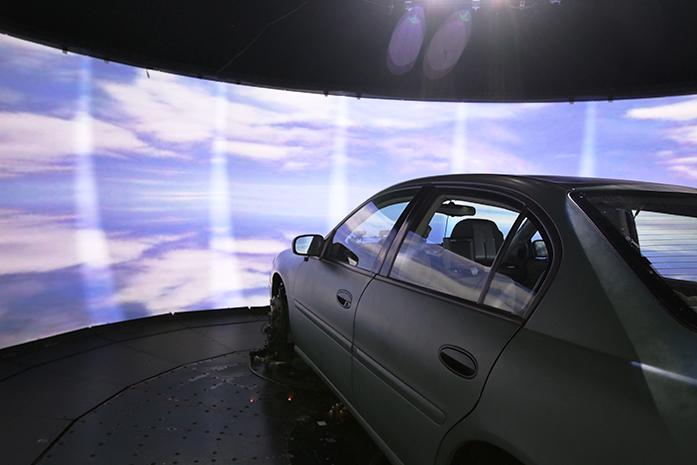 University of Iowa researchers have created an enormous virtual city as part of one of the most advanced driving simulators ever made.

Researchers at the College of Engineering’s National Advanced Driving Simulator are testing the automated vehicles of the future in an environment called Springfield environment. At 285 square miles, Springfield allows vehicles to drive through urban, residential, interstate, and rural areas.

Omar Ahmad, the simulator’s director of operation for, said Springfield assists with the significant amount of research and testing required for automated and driverless vehicles.

Ahmad said they call the environment Springfield because most states have a city with that name, and it can resemble any city. However, many of Springfield’s buildings may look familiar because they were modeled after existing façades in Iowa City and Coralville. One street even resembles Washington Street, complete with the Englert Theater.

“We even have a Cambus running around in Springfield, so it definitely has a local connection, but it represents any city,” Ahmad said.

For him, Springfield is important because it enables future research.

“The work that Google has been doing for instance, they’re probably in the lead for testing vehicles on the road, but they still have only done a million, maybe a couple million miles, and we’re talking hundreds of millions of miles that need to be done,” Schwarz said. “So that’s one of the attractions of using simulation, because once you get the scenarios you want to test, then you can start running simulations really fast and in lots of situations.”

The researchers said that other universities are building physical proving grounds to test vehicles, but Springfield’s simulation allows for the testing of impaired driving and near crash-situations that cannot be done with real humans.

“In a test track you can put up a mannequin, but you can’t have a person walk across the path of that car,” said David Heitbrink, a software engineer at the simulator. “We can do things that definitely aren’t safe to do on a proving ground.”

The researchers said the city was created to be as broad and realistic as possible.

Along with cars and buses, users will find ambulances, dump trucks, bicyclists, police cars, and railroad crossings around Springfield. In rural areas, there are cows and horses, and drivers might even encounter a deer carcass. Driving can also be complicated by different weather conditions, rubbed off lane markings, or surrounding cars that speed and break the rules of the road, Ahmad said.

“We’re trying to be very realistic in how we approached building this large city,” he said. “We didn’t want everything to be perfect.”

One of Springfield’s most important features is the presence of highly realistic human pedestrians that many other simulators lack.

“In simulation, there’s a common phrase, ‘ghost town effect,’ or I’ve heard it called a ‘neutron bomb effect,’ ” Heitbrink said. “You have these fancy cities, but they just look dead. There’s nothing in it, there’s no people in it, and it just gives this kind of eerie feeling. I think that’s also what [Springfield] helps; it gives you the context of being in a living city.”

Ahmad said Springfield pedestrians can be seen walking around carrying objects and talking on cell phones, but the researchers can also program them to do specific actions.

“We can do realistic studies of interactions with pedestrians that weren’t possible with lesser models of human simulation,” said Tim Brown, research scientist for the simulator.

“So for instance, if you want to look at the interaction between a pedestrian starting out onto the street at the last moment, that’s something that we can command our pedestrians to do,” Ahmad said.

“Most of Springfield looks like what you would see today on the road,” he said. “But if somebody wants to build a future city, a city from a decade from now or three decades from now, parts of Springfield can be transformed to look like the future.”

The researchers said they were open to sharing Springfield with others for driver education, outreach, and further research purposes.