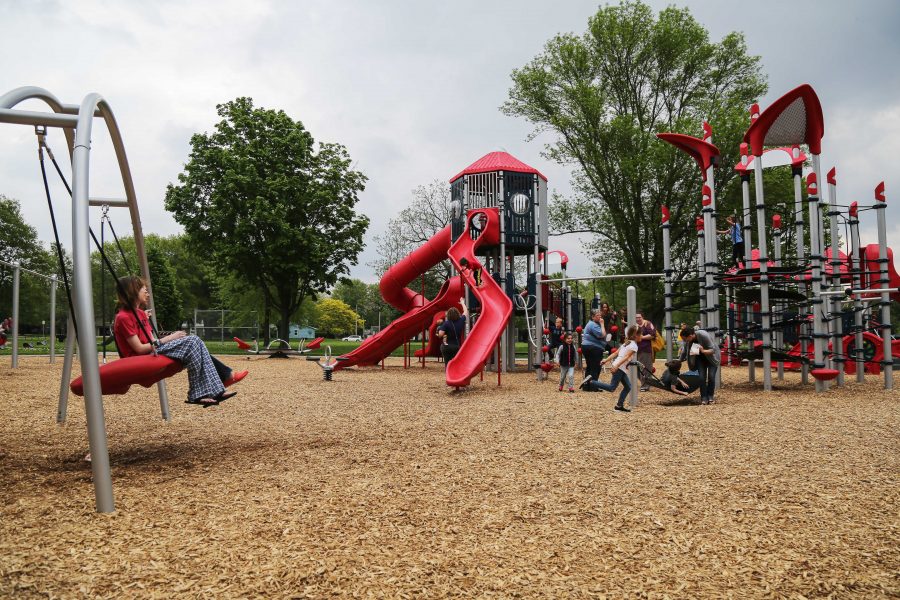 Iowa City residents watch their children as the play on Iowa City's newest playground at Mercer Park in Iowa City,Iowa on Wednesday, May 11, 2016. The official opening of the park was declared with a ribbon cutting ceremony. (The Daily Iowan/Anthony Vazquez)

Dozens of local children could be seen swinging, sliding, and climbing their way through Iowa City’s newest playground Wednesday after city officials cut the ceremonial ribbon.

A grand opening was held Wednesday evening to celebrate the recently built Mercer Park playground. The new structure was constructed as part of the Iowa City Strategic Plan and was designed by Minnesota-based firm Landscape Structures.

“There was a very small [playground] there before, and the one it’s being replaced with is probably the largest in the whole area,” she said.

The playground features a tower with two tall slides, several swings, spinning platforms, monkey bars, a boogie board, a bouncing seesaw, and a large net area for climbing.

“There are some great big climbing structures appropriate for kids over the age of 5 that offer all kinds of excitement and fun like you haven’t seen in playgrounds for quite a while,” Seydell-Johnson said.

Interim City Manager Geoff Fruin said it has been fun to see all age groups enjoying the new space.

“We went much more vertical,” he said, “With it, we added some climbing structures that appeal to a wider demographic.”

Fruin said Mercer Park has always been well-visited because of athletics events held there, so it is exciting to see the park have something bigger than the previous play space.

“It’s never had a playground that matched its regional identity,” he said. “It’s been received incredibly well by the community.”

Seydell-Johnson said the playground has been packed with families every time she has visited so far, usually with 50 to 75 kids on it at a time.

“The park staff tells me they have never seen a playground used this much so soon,” she said.

One part of the old Mercer play area that still remains alongside the shiny new construction is a fire truck play structure. The fire truck will be repainted and refurbished later this summer through a $2,000 donation from the Iowa City Optimist Club.

“When we first started to tear down the old playground, the first thing we heard from neighbors was ‘don’t take away the fire truck,’ ” Seydell-Johnson said, “So we found a way, with the help of the Optimist Club, to keep it there.”

At the ribbon-cutting ceremony, City Councilor John Thomas praised the playground for being all-inclusive and accessible to both children and parents with disabilities.

“It’s cutting-edge in what it offers,” he said.

Thomas said that if he had a child or grandchild in Iowa City, he would bring them to the park.