The Daily Iowan • May 12, 2016 • https://dailyiowan.com/2016/05/12/chasing-songs-not-pigskins-former-hawkeye-football-player-omar-truitt-moved-from-the-field-to-the-recording-studio/ 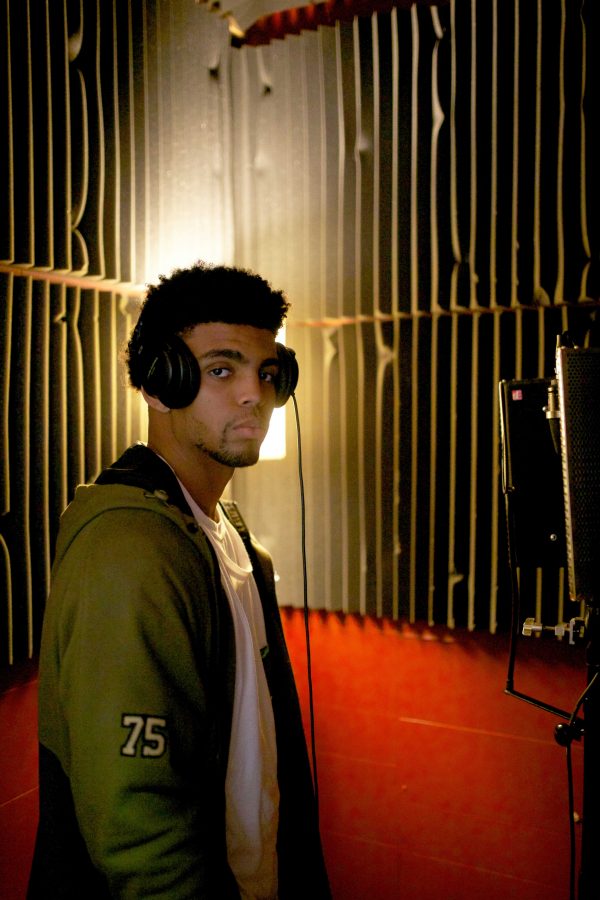 Omar Truitt records in his studio, downtown Iowa City on Tuesday, May 10, 2016. Truitt is a former Hawkeye football player. (The Daily Iowan/Mary Mathis)

In high school, Omar Truitt was “The Man.” He played baseball and basketball, ran track, and graced the football field all four years as a defensive back, wide receiver, and quarterback. His senior record boasts 40 tackles, 10 pass breakups, 6 interceptions, and 1 touchdown on defense.

“Ever since middle school, private high schools recruited me,” Truitt said. “I was the only freshman to play on varsity. It was a big deal.”

Truitt headed to the Hawkeye football team expecting to retain his title. Yet over the past year and a half, the sophomore has found himself off the team, on an academic break, father to an 8-month-old baby girl, and trying to break into the rap industry.

His story, crowded with twists, turns, and pop-ups, knows no certainty at the moment. But once upon a time, his future held no mystery.

Truitt was supposed to follow the strides of his father, former NFL wide receiver Olanda Truitt. Prompted by a dream of a yellow brick road, Omar Truitt committed to the Hawkeye football team by phone in June 2013. Two weeks later, he visited Iowa for the first time. In February 2014 he signed the official papers and became a Hawkeye. Football season began and Truitt’s expectations narrowed to one: playing.

“There was some pressure,” Truitt said. “Me and [my dad] working out and us talking. Different people in my area saying ‘Omar, you’re gonna be great.’ I was coming here like ‘Omar, you got to be the man.’ ”

His dreams were put on hold; Truitt was redshirted.

“Things don’t work out your way sometimes, but yeah, it broke my heart,” Truitt said. “Having to tell my dad, my mom, my family that ‘Yeah, I’m redshirting’ and them having to tap your back telling you, ‘It’s gon be OK, just keep practicing hard.’ ”

The taps, though they felt heavy and unexpected to Truitt, held a genuine load of understanding.

“I think he always felt that he had to make us proud or impress us,” Carla Truitt said. “We were proud of him on and off the field. The transition was hard for him, but it was something we were expecting. I think we were more prepared for it than he was.”

During a season on the sidelines, Omar Truitt rededicated himself to the sport and school. He watched extra game tape and did unsolicited workouts at the complex.

All this while harboring thoughts that in a few months — August 2015, to be exact — he would be a father. He had received a phone call with the news during the TaxSlayer Bowl game.

Truitt spent the summer working at Cold Stone Creamery in Iowa City for extra money to support his unborn daughter. Workouts continued and a pain in Truitt’s groin/hip area, that he’d voiced concerns about to the football trainers for months, intensified. An X-ray finally showed Truitt had scarred tissue. After an early August surgery by a specialist in Oklahoma, Truitt returned to an empty house and nearly over summer break.

“I was really going through it in my own room,” Truitt said. “[My daughter’s birth] is about to come up. I’m hurt. There’s so many questions and things I can’t answer. I have to mature at a very young age. She’s coming along, me and her mom aren’t together, so that pressure is there. I’m trying to do everything right for me, for her, for my family. I went to see a counselor. I wanted to hurt myself, but I’m in a much, much, much better place with myself in life.”

His roommate at the time and now, Robert Henry Davis, was witness to Truitt’s emotional and mental journey.

“He always seemed like he was thinking about something, always saying he feels like there’s something else he should be doing,” Davis said. “He became more spiritual and was talking to God every day.”

That something he should do wasn’t football, as everyone had expected.

No specific release date was given, but Steve Roe, the Hawkeye director of athletics communication, said Truitt’s departure happened before spring practice began this year. Over the course of the last two semesters, Truitt refocused his vision from football and academics to the world of entertainment. He began working with UI sophomore and music producer Andrew Taylor on beats and songs.

“You see more of his confidence through his art as opposed to normal everyday activities,” Taylor said. “Omar knows; Omar really believes he’s going to make it. It’s easy to see that through his art.”

In addition to making music, Truitt explored his talent in the theater. This past March he starred in his first play, Baltimore, as Bryant. Without any theater experience, the former football player had a challenge ahead of him, one he feels he conquered.

“It was a thing where I just felt so comfortable,” Truitt said. “It wasn’t even like football, where you step on the field and you’re nervous. I came into rehearsals like the quarterback. I’d goof around but still be on point. It felt good. It made me have confidence.”

Still, Truitt’s full dedication is to his music, so much so that he withdrew from the UI this semester.

“I think that music started showing him more love than football,” said Carla Truitt. “I wish he could have thought about it more clearly, and we could have figured out both plans. He can have both; he can have it all.”

Although he has no intention of recommitting to football, Truitt plans to return to his academics at some point. His mother hopes the break will only be for a semester.

“I just want Omar to know people believe in him,” Carla Truitt said. “I believe in him. He went [to college] for a goal — to finish — and I’d like him to finish. I don’t want to raise a quitter. Let’s finish what we started and let’s make a song about it.”

The beats have been mixed and the songs written and recorded. The countdown to his first mix tape, Live Life, is a little under two months. Producer Taylor said Live Life has a rock/pop influence to it.

“It’s definitely a blast-your-speakers type, but it’s also melodic, so you’ll find yourself not only rapping along but also singing along,” Taylor said.

The name is based on Truitt’s new attitude of following his dreams.

“Make life beautiful,” he said. “Don’t make it harder than what it already is. Do whatever you want to the fullest because you only have one life.”

Though majority of the music is not based on his life’s story, he hopes to one day, after catching the attention of record labels and fans, use his life experiences.