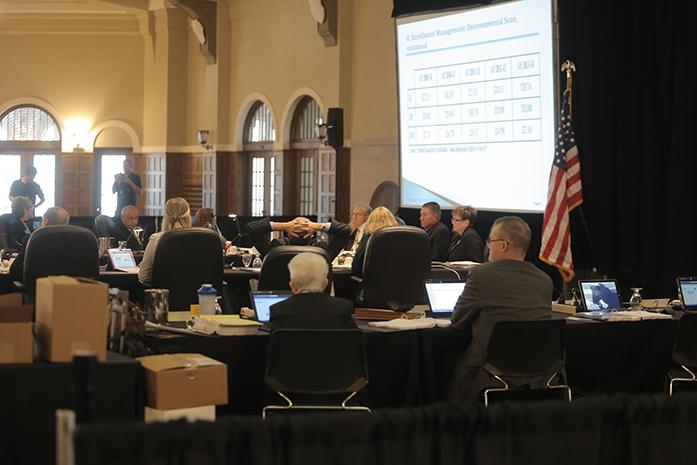 On May 6, Gov. Terry Branstad appointed Mike Richards to the state Board of Regents, filling the seat left empty by Mary Andringa after her resignation. Her resignation has brought forth allegations of cronyism; it allegedly coincided with a massive deal struck between the University of Iowa and a furniture manufacturer she has been involved with since 1999. Such allegations come from honest suspicion, because administration on almost all levels involving higher education has been less than transparent. It seems that Richards’ appointment to the regents seems just as questionable as the dealings of previous occupants.

Because this appointment was made while the Iowa Senate was on recess, his term begins immediately. He would finish the remaining five years of what was supposed to be a staggered six-year appointment for Andringa. Though the prospect of his actually serving the remaining term is still in the hands of the Iowa Senate and its necessary approval of his appointment, it still remains lost to some why there was such a rush to circumvent legislator approval.

The board consists of four Republicans, three independents, and one Democrat. Iowa law states that the regents cannot consist of more than five members of a single political party. Andringa, prior to her resignation, was the fifth Republican, pushing the law to its cap. The appointment of Mike Richards, also a Republican, maintains this lopsided political spread.

Richards is not simply an average member of the Republican Party, only casting his vote on conservative issues in each respective election. He is a prominent GOPer, a member who has donated large sums of money to right-wing-inclined political campaigns, from Chris Christie’s bid for presidential office to campaigns on our home turf here in Iowa, such as Branstad’s for governor. His donations to the governor’s campaigns have amounted to about $40,000 since 2009, according to the Iowa Ethics and Campaign Disclosure Board.

Given the already Republican-weighted regents and Richard’s history of financially supporting Branstad’s campaign, this appointment seems telling of party favoritism and political spoils for campaign finance than an honest intent on staffing a board that has, in the past, served Iowa well.

It deserves to be noted that Richards does have an extensive and admirable professional medical history. According to the Press-Citizen, he has “spent nearly 20 years as a physician in private practice. His career also includes stints as chairman of MedTec Inc., a medical technology company based in Orange City; chief medical officer of Iowa Health System; president and chief executive officer of the Iowa Health Physician Foundation; and chief executive officer of Iowa Physicians Clinic P.C.”

That said, all other aspects of this appointment reek of individual and political gain. The Daily Iowan Editorial Board remains steadfast in our suspicion regarding Richard’s position. How this appointment will play out on the Senate floor remains to be seen, but we remain hopeful that the senators approach the job with the utmost scrutiny of Branstad’s and Richard’s intentions with the direction of the regents.