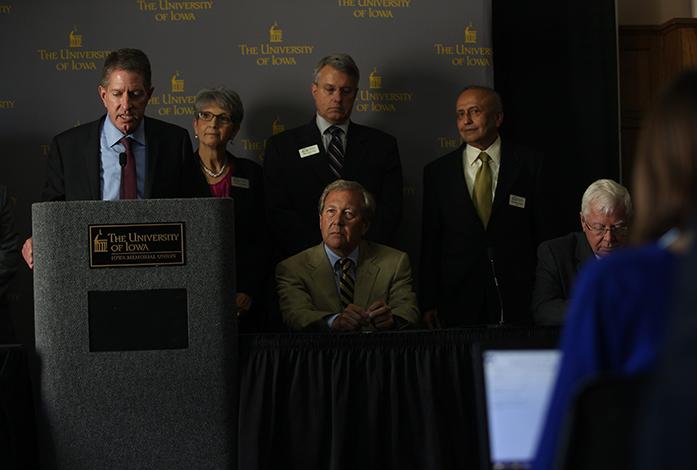 Regent President Bruce Rastetter appears to need some mentoring regarding the democratic dialogue between the state Board of Regents and the stakeholders of Iowa’s state universities — namely, all Iowans.

It might be too much of a shock to start with examples from the world’s great democracies, such as the British House of Commons Question Time, or President Obama’s “We the People Petitions.” That would be like Rastetter running naked from a Finnish sauna and jumping into a frigid snow bank. No, it’s best he begin with baby steps.

Perhaps he should start by studying the “formerly communist” countries.

Russian President Vladimir Putin spent his 20s and 30s with the KGB. Rastetter could begin by aspiring to achieve Putin’s style of democratic dialogue.

So how does this major country’s leader, this Donald Trump enthusiast since December 2015, the fellow whose attack jets flew at 500 mph near sea level and within feet of a U.S. Navy destroyer April 11 and 12, how did he go about a dialogue with his people two days later?

As the New York Times reported, Putin’s “live call-in show [ran] three hours and 40 minutes … [Q]uestions poured in about high prices, unpaid wages, rising utility bills, and the closing of schools and hospitals. In all, around 3 million questions …”

From the opening question, this was no nine-inning softball game. Putin acknowledged how many questions dealt with poor roads. Indeed, the first questioner showed a video of traffic on her roads, complained about the abundance of potholes and even got in some licks about the lack of sidewalks and bicycle paths.

As for Putin’s responsiveness, Rastetter might want to note the Times report that “after the first caller [from Omsk] complained about the poor state of the roads there, the city posted on Twitter pictures of new asphalt being laid down before Mr. Putin was off the air.”

There are a couple other things Rastetter might discuss with President Putin.

One is the tuition-free university education Russia provides its students and how Iowa might join this expanding group of progressive states and nations. (Russia has the highest percentage of college-educated citizens in the world.)

The other is how Putin gained a firmer grasp of American politics than Rastetter — who put his money (literally and figuratively) on New Jersey Gov. Chris Christie. In December, President Putin had perceived Trump (whom he’s praised) as the candidate most likely to win the Republican nomination.

In summary, both Putin and Rastetter take questions from constituents. But there the similarity ends.

Putin takes the questions of greatest concern to Russians and answers or otherwise responds to them. Iowans get no responses; it’s not clear the regents even watch their video comments.

Putin gave the exchange nearly four hours, on nationwide television, during convenient times for viewers, in which he was an active participant. Rastetter devotes one hour, during times least likely to encourage participation, in which no regent participates.

Putin receives 3 million questions from 143 million people. A comparable goal for Rastetter, based on Iowa’s population, would be 60,000 inquiries from Iowans.

Hopefully, of course, he will soon be able to far exceed these minimalist communist standards.