Reveling in the new plays: New Play Festival comes to a close 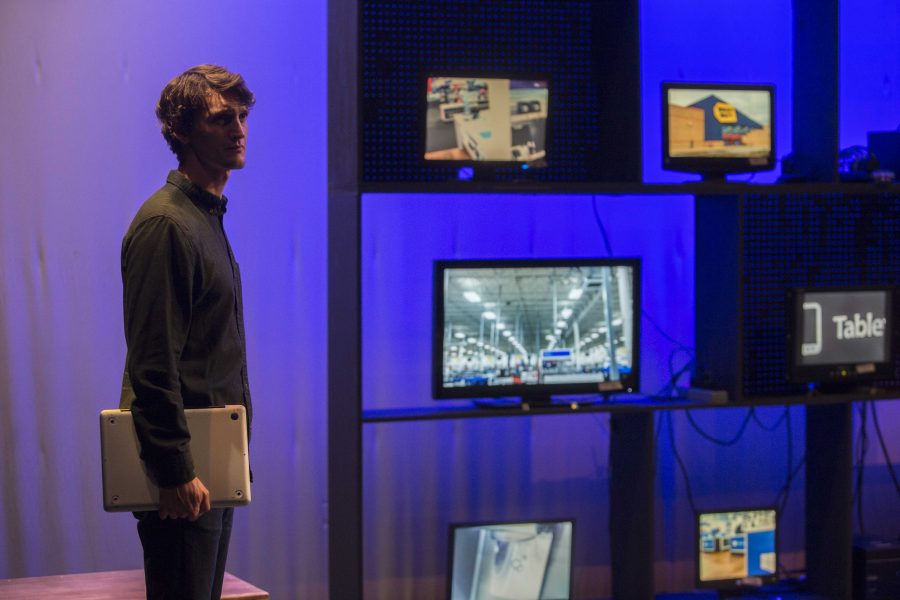 Actor Zachary Twardowski waits before asking for comments on his wardrobe during a rehearsal at the Theatre Building on Tuesday, May 3, 2016. The Iowa New Play Festival will run from May 2-7. (The Daily Iowan/Ting Xuan Tan)

“I love festival week; it’s such an exhausting time, but the feeling of fellowship and unity is amazing,” said director Marina Bergenstock.

With every staged play under a $400 budget, communication has been key as designers and directors share set pieces and stages.

“There is so much moment-to-moment problem solving with so many people involved, there are always things that will come up that you’re not expecting,” she said. “We want there to be good shows, but we also want people to have fun working on them.”

Visiting professional playwrights have been in residence for the week, their presence raising the expectations for every graduate student.

“It makes the playwrights nervous because they know the work will be analyzed right after,” Winfield said. “It makes the fest feel like an event in a new way because there are new people coming in just for the show. It makes everything feel very present and real.”

Audiences will have their choice of plays. Among the staged productions is Doxxed, a play by Sam Lahne directed by Bergenstock. The play begins with an email, sent from a supposedly hacked account, but quickly spirals out of control.

“It’s very nonlinear, so the scenes take place out of order,” Bergenstock said. “So the audience is trying to construct a narrative with the pieces of the story they are given, consistently having to re-evaluate what is the truth.”

Audiences can find no solace in the play’s set or characters, because every action and physical element distorts impressions.

“Sometimes, the characters aren’t even lying on purpose, they’re just not admitting things to themselves,” Bergenstock said. “We’re presenting the audience not only a fragmented story structure but a fragmented scene, also. Everything is coming in bits and pieces.”

The engagement necessary to piece the story only reflects the nature of the whole festival.

“These shows are more intimate,” Winfield said. “They don’t feel smaller but they feel like they were created for an audience they know.”