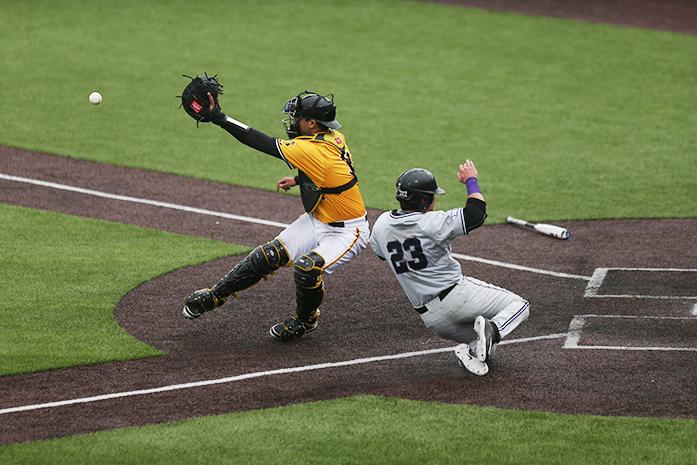 For some guys, it just clicks.

The baseball starts to look more like a beach ball at the plate, and it jumps off the bat a way it had not previously.

The ball starts to find the glove more when they are in the outfield, and it never seems to lose momentum when it’s launched from their arm. Some guys are lucky enough to have this progression happen naturally.

Then there is the group of guys who sweat through a winter in batting cages, working meticulously on their swing, approach, and everything in between to try to get right what was broken a season ago.

Iowa center fielder Joel Booker is one of the latter.

“Last year everything was a struggle, and I didn’t feel comfortable at all,” Booker said. “There were points when I didn’t want to hit.”

As a junior last season, Booker posted a .235 batting average in 217 plate appearances for an Iowa team that finished with the second-most wins in school history.

He started every game for the Hawkeyes in right field, but nobody would have accused him of being one of the better players on that team.

At times, Booker seemed like an elite athlete trying to figure out the game of baseball, with a whole lot of potential still untapped.

After Iowa was run from the NCAA Tournament by Missouri State in June 2015, Booker got back to work in the cage.

Leadoff hitter and center fielder Eric Toole was gone, and Booker seemed the heir apparent to fill the shoes of Toole, who hit .306 and stole 27 bags in his senior season.

Getting comfortable in the box was step one.

“I was just seeing pitches,” Booker said. “Getting used to seeing pitches [in the cage] has helped me a lot. I’m seeing the ball a lot better now.”

Step two was translating the work he did in the cage to the field when the season came around.

As Iowa traveled south to open its season against Dallas Baptist, Booker was the first Hawkeye to dig into the box, leading off and playing center field — just as predecessor Toole, who is now in the Colorado Rockies’ organization.

“I think he would tell you he’s more comfortable and confident in general this season,” Iowa assistant coach Marty Sutherland said. “Kind of having been through it for a year, and not having a type of season that he knew he was capable of, he has that experience now of knowing what the grind is like.”

After struggling for the first two weeks of the season, Booker started to find a groove at the top of the order.

His bat had easy pop, his speed did not slump, his arm in center field did not lag, and it doesn’t look like he is coming down anytime soon.

“I think he learns a little bit more about himself as a player every day,” Sutherland said. “You’re talking about in overall ability, a really special athlete in general. He can really run, he throws well, has some power in there, so as far as those tools go from a professional standpoint, you’re talking about four or five of them.”

Booker checks the box with every tool: running speed, arm strength, hitting for average, hitting for power, and fielding.

Booker is 18-of-19 on the base paths this season, possesses a plus arm in center field, is second on the team with a .331 average, leads the team with five long balls, and covers as much ground as any outfielder in the Big Ten.

Where has this player been in the past?

The player Booker took over for said it has been there all along.

“Last year, Joel had his ups and downs throughout the season,” Toole said. “But he showed flashes of how good he really was in right field and at the plate.”