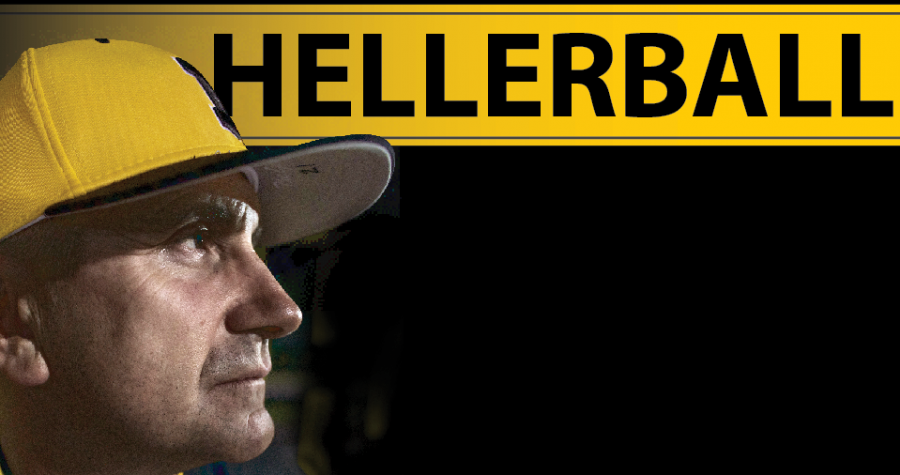 The trip from Eldon, Iowa, to Iowa City is only around 90 miles. It takes no more than an hour and a half to drive.

There are numerous ways to get from the small southeastern Iowa town to the home of the state’s Big Ten university.

One route takes you straight east from Eldon, and a left turn in Mount Pleasant onto Highway 218 North takes you almost straight to the steps of the Old Capitol.

There are countless other ways to crisscross black-ball county roads to get from Eldon to Iowa City, but none are longer than the path Rick Heller took. It’d be impossible to map the path Heller, the head coach of the Iowa baseball team, took to get from his hometown, population 920 and declining, to Iowa City.

“Rick showed up and he got people to buy-in,” said Brian Baker, one of Heller’s assistant coaches at Northern Iowa. “He said, ‘This is what’s going to happen,’ and it did happen, and the kids bought into it.”

Heller brings a track record of success with him. Every program he has touched has been successful, dating back to his days as a three-sport athlete at Upper Iowa, a Division-3 school in Fayette, Iowa, population 1,338 in the 2010 census.

Upper Iowa, where he was a letterwinner in baseball, basketball, and football, also provided a launching pad to Heller’s successful college coaching career. He returned to Upper Iowa and coached the team to the program’s first Iowa Conference title in 20 years in 1993. His team finished sixth in postseason polls in 1997.

Fayette is not internationally known as a hot place to be. It doesn’t draw the sameSaturday-night attractions that Iowa City might.

“He got a lot of kids from Minnesota and California,” Baker said.

Those kids brought home titles, and in his first head-coaching stint, in small town Iowa, Heller was successful. He totaled a 291-194-3 record and was named Iowa Conference Coach of the Year four times.

Eldon to Fayette is 187 miles almost due north and stop one on Heller’s college baseball journey.

From Fayette, Heller moved on to Northern Iowa, an underfunded Missouri Valley program whose baseball field was eight miles from campus, in the next town over.

The cards were stacked against the Panthers, who traversed from Cedar Falls to Waterloo for practice and games at Waterloo’s Riverfront Stadium.

“The places I’d been, we had to work for everything we’d gotten,” he said. “Our guys were out parking cars in the cold and the rain and the wind at every football game that was played at the UNI Dome.

“We had people asking us to have our guys miss class so we could be out there at 6 in the morning, and a lot of times we wouldn’t get home until 1 or 2 o’clock in the morning that next day. Not many people have to work that hard or make the sacrifices we had to make to try to put a good team on the field.”

With the work Heller and his team needed to put in, it’s almost surprising he won 270 games as the Panthers’ head coach.

Although to hear others tell it, the success just comes with Heller’s territory.

“I couldn’t have asked for a better person to start under,” said Dan Heefner, an assistant under Heller at UNI and now the head coach at Dallas Baptist, a regular at the NCAA regional level and a team that swept the Hawkeyes in February. “He’s a great baseball guy, he’s very detail-oriented. He’s going to show up every single day and work like there are no days off.”

The Northern Iowa program was shuttered in 2009, however. The athletics budget needed slimming down and baseball was the team to get the axe.

Baker said the team found out after its first series of the season, a road set against Arkansas-Little Rock.

But before the program met its end, Heller’s Panthers won the 2001 Missouri Valley title. They also won their final game in team history, 4-3 over Bradley, in walk-off fashion.

Fayette to Cedar Falls is 55 miles, and part of the road that brought Heller to Iowa City.

With the UNI program folded, Heller turned to another Missouri Valley team, and once again, his team had great success.

In four years at Indiana State, Hellerball, a modern style of play that prioritizes on-base percentage, sparked 129 wins. In his first season with the Sycamores, Heller coached the team to a 35-19 record and a third-place conference finish.

In 2012, under Heller’s guidance, Indiana State finished 41-17, a program record for wins, and the team had a player drafted 34th overall the following year.

Things were good for Heller.

He enjoyed where he was, had the support of the Indiana State Athletics Department — a new facility, travel budget, and good people in charge — and was building a program in t Missouri Valley that could compete with the two Big Ten schools in the state.

Cedar Falls to Terre Haute, Indiana is 417 miles, and it looked like it could have been the last stop on Heller’s baseball road.

Then, the Iowa job opened, and Heller applied.

Although he thought he wouldn’t get the job, he said those in certain baseball circles assumed he would.

Part of his philosophy is to control what he can control, however, and he did just that at Indiana State, hitting the road to recruit, though he said it was hard with the looming possibility of him leaving for a new job.

He’d applied for the Hawkeye head coaching job previously and made the same recruiting pitches he’d made previously.

He got the Iowa job this time, inheriting a program at the bottom of the Big Ten barrel.

“I was in a good place; that was the great thing, I wasn’t looking for anything. I was as happy as I’ve ever been,” Heller said. “I thought it was kind of a long shot and that if I got it, great, it’d be awesome.

“The right people have to want you.”

The people did want him. Heller took the Iowa job and immediately began to turn the program around, despite having just one freshman player show up on campus for Heller’s first year.

The culture around the program was changing, and people noticed. The Hawkeyes planted a full turf field, allowing them to practice and play outdoors much earlier than they had in the past, and plans were drawn for a new stadium.

“Right away, you could see it from Day 1, he just loves the game of baseball,” said Nick Day, who graduated in 2015 after hitting a walk-off home run against Minnesota in last season’s Big Ten Tournament. “He came in every day and wanted us to get better.”

Day said his first two years in the Iowa program were frustrating. The Hawkeyes were a combined 45-54 in those seasons before Heller. Day said seeing the work the team put in not meet with success put a sour taste in the players’ collective mouth.

“You just want a change,” Day said. “Heller came in, and you just saw the energy he brought. It was something that opened our eyes a little bit.

“He’s a blue-collar guy, and he knows the game.”

As much as the players respected Heller, Heller had the same feeling towards them. His core group of players was the junior class in 2014, which included Day.

The message, from the outset, was Heller would not run them out of town.

The culture seems to have turned around; Iowa went 30-23 in Heller’s first year at the helm. A 41-18 campaign, including two wins at the NCAA Regional in Springfield, Missouri, the first NCAA Tournament wins for the Hawkeyes in 25 years, followed.

The Hawkeyes have hovered around .500 in Heller’s third year, though the head coach said he has plenty of reason to be grateful, despite his long journey — Terre Haute to Iowa City is 330 miles — to the only Division-1 baseball program in his home state.