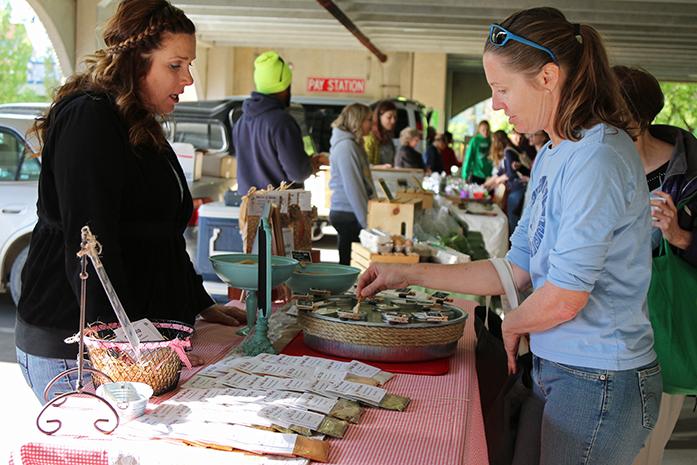 A customer samples some homemade dip at the Chauncey Swan Ramp on Wednesday, May 4, 2016. Iowa's first farmer's market of the year was held at the ramp. (The Daily Iowan/Tawny Schmit)

Dozens of people lined up at Chauncey Swan parking ramp Wednesday, waiting for the first gathering of local growers’ produce at this spring’s first Farmers’ Market.

This season, people will be able to use credit cards and electronic benefit transfer cards to make purchases through a token system for the first time.

“The first day’s always one of the busiest of the year,” said Cassidy Bell, the coordinator for the Farmers’ Market. “It’s good to see people so excited about it, especially this early in the season.”

The Farmers’ Market usually begins the first week of May, Bell said.

“This year, we have more than 150 local vendors signed up for Wednesday and Saturday,” she said. “We’re also really excited about the new market-wide [electronic-benefit] system that’s new this year as well.”

Bell said up until last year, only three vendors in the market took the cards as a form of payment.

“We’re hoping it will get even more people in here to get some healthy, fresh stuff the vendors have,” she said.

Rick Schwab of Bountiful Harvest Farm near Solon said this was his first year selling at the market, but he has attended as a shopper for years.

“This was the first year we decided to sell at the market, and we’re using it as a pick up location for our [Community Supported Agriculture] boxes as well,” Schwab said.

Community Supported Agriculture is a program in which locally grown produce is picked up by customers, who sign up at the beginning of the spring, once a week at the Farmers’ Market, Schwab said.

“It’s great; if you like fresh fruit and vegetables, this is the way to go,” he said. “We’ve already had a few people sign up, and we’re not even halfway through tonight.”

Dale Buck of Dale’s Farm Fresh Eggs and Produce, said he had been coming to the market for roughly four years and made it to the winter market as well.

“Chickens don’t really have an off-season,” Buck said, smiling. “They lay eggs all year-round. I usually have some produce, too, but probably not this year, because I’m putting the farm up for sale and buying a new one in Linn County.”

Buck said his favorite part about the market was seeing and talking to the variety of different people.

Bell said she agreed with Buck and said people coming together was one of the best parts of the market.