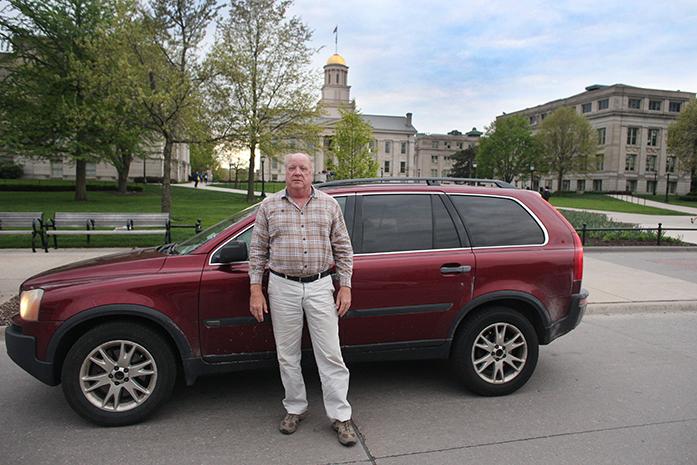 Uber driver Donald Ebner poses on Clinton Street in Iowa City, IA on May 2, 2016. Uber was approved for Iowa City this past week, but Ebner has been a driver for 10 months. Ebner, a retired police officer, started driving because he likes to meet new people. (Photo Illustration by Joshua Housing)

“As soon as we launched, we saw a lot of excitement from the students and the drivers,” said Leor Reef, a communications associate with Uber. “Everyone seemed super-excited to relish their first weekend of Uber in Iowa City.”

Reef said dozens of people have already signed up to be Uber drivers in town.

“There’s a flexibility in people signing up to drive for the drivers and the riders,” he said.

“There are different people driving at different times, and sometimes there are fewer drivers than there are on Friday nights. People can drive for how long they want and when they want.”

However, Roger Bradley, manager of Yellow Cab in Iowa City, said the presence of Uber didn’t really affect his business.

“It’s about continuing to provide the service and the safety we’ve been providing,” he said. “What we’ve done has worked; There’s no radical change for us; Uber hasn’t reinvented the wheel.”

He said the only real difference between Uber and cab companies is the way they take the orders.

At City Council meetings within the last month, various cab companies voiced concerns of establishing a separate ordinance for Uber to come to Iowa City.

“We didn’t understand why Uber deserved an entire new set of rules,” he said. “It’s pretty clear they are doing the same work we are. Our reaction was why should the rules favor one company over the other?”

With Uber in town, Bradley said, cab companies are working with city staff to set up an ordinance establishing and reworking rules the companies have to follow.

“The city is working with us toward something,” he said. “It’s not in its final form yet, and we don’t know all the details. We’ve met with them to discuss some things, and there are things being worked on but it’s not yet complete.”

Iowa City City Councilor Rockne Cole said the goal of working with the cab companies is to make sure Iowa City maintains a fair market place.

“We realize the value of Uber,” he said. “We want to make sure the cab companies have equal footing and the companies want a fair chance so we are going to make sure we are able to achieve that.”

Cole said many things are being looked to ensure fairness in the market, which includes how licenses are acquired and the pricing structure of the cab companies.

“I think they will look at criminal-background checks and drivers’ licensing,” he said. “Ultimately, staff will come back to us and make sure everyone has a fair chance to compete.”