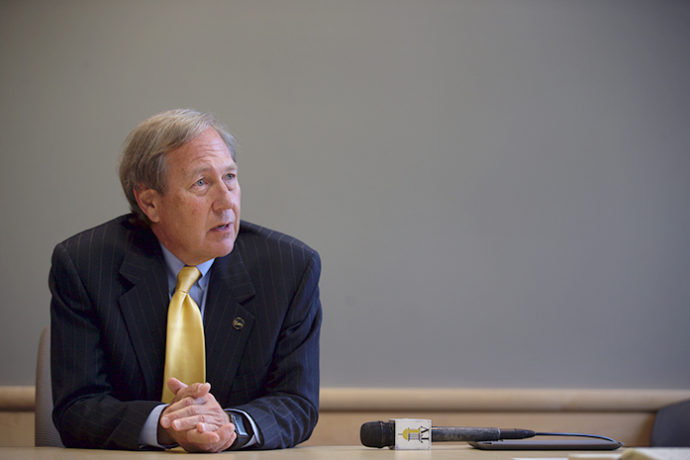 University of Iowa President Bruce Harreld will argue for “more dramatic” increases in tuition moving forward, potentially as a way to offset lower amounts of support from the state Legislature.

“We have an obligation to the state, and we will fulfill that obligation,” he said. “But at the same time, I think someone needs to be, and I am, responsible for making sure that doesn’t sacrifice the quality of what we’re doing, and I think we are at that point.”

Harreld pointed to the UI’s drop in rankings, done annually by U.S. News & World Report. The UI is currently tied at 82nd.

“I am speculating and will be arguing for a more dramatic increase going forward. We are at the bottom of our peer group,” Harreld said Monday in a Q&A session with The Daily Iowan. “We could raise our tuition well over $1,000 and still be in the bottom of the Big Ten in terms of in-state tuition.”

Tuition, he said, could be a way to increase revenue. Funding, a key piece of any higher-education institution, is needed for capital projects and faculty salaries, which currently do not compare well with other institutions.

“Do we have real, significant needs right now to improve the quality of what’s going on on this campus? Absolutely. I think it’s the way to deal with it,” he said.

“Education funding this year is in a very sad state,” said state Sen. Herman Quirmbach, D-Ames. “I don’t think we did adequately for them.

“Do you want to know why student debt has been rocketing up the last decade? It’s because the funding for our universities has been collapsing.”

According to data from the Institute for College Access & Success and College InSight from the U.S. Department of Education, in 2013-14, students graduated from the UI with an average debt of $28,716. Iowa State featured similar numbers, with its students graduating with an average of $28,880. Iowa as a state ranked eighth-highest in the nation for the amount of debt its students face. The national average was $28,950. Sen. David Johnson,R-Ocheyedan, said raising tuition at a time of historic levels of student debt seemed “counterintuitive.”

“We really don’t have a plan in place as a state to tell help students to deal with that debt. We don’t have that on the state level or the federal level,” he said. “Both the state and federal government are going to have to address that issue eventually. To think to continue to graduate people with skills that we need in our world, and they’ve got these crushing amounts of debt that my generation really didn’t experience — something has to happen.”