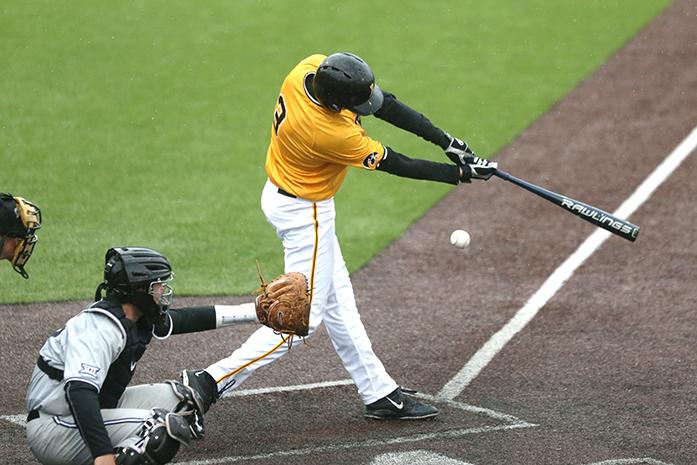 Iowa short-stop Nick Roscetti swings the bat during game three of the Iowa-Kansas State series at Duane Banks field on Sunday, May 1, 2016. The Wildcats defeated the Hawkeyes, 4-2 taking the series. (The Daily Iowan/Margaret Kispert)

Coming off a weekend series loss to Kansas State, the Iowa baseball team (20-21, 7-8) would like to gain a bit of momentum against Western Illinois before they head to Columbus to take on the Buckeyes this weekend.

“Obviously, we need to improve,” senior Nick Roscetti said after the Hawkeyes dropped the second game of their Sunday double-header against Kansas State. “[This series] was important for us momentum-wise, but we have to look past it now. We have Western [Illinois] this week, so we got to look forward to that.”

The series loss to the Wildcats was disappointing; the Hawkeyes scored only 6 runs in three games. As far as the grand scheme of things goes, however, dropping two of three against the Wildcats is not the end of the world.

With a losing record in both the conference and overall, Iowa is not being considered for an at-large bid to an NCAA regional. The Hawks are realistically fighting to be one of eight teams to receive a bid to the Big Ten Tournament at this point, and they are currently on the outside looking in at ninth place in the conference.

Nonconference games do not count toward the Big Ten standings, so dropping two games to the Wildcats does not hurt Iowa. It is the way Iowa played that is the biggest takeaway from the series.

The Hawkeyes did not get much production from the bottom half of the order and played sloppy defense at times.

With a weekend series against Ohio State looming — currently eighth in the Big Ten, one game ahead of Iowa — the Hawkeyes have one game to correct the woes of the Kansas State series before the bullets start flying in the most pivotal matchup of the year.

That opportunity comes against Western Illinois, a team that Iowa split a pair of contests with last season.

The Leathernecks are 13-26 and coming off a series win against South Dakota State.

“Last year, [Western Illinois] whooped us pretty good at their place,” head coach Rick Heller said. “We’re definitely not going to take them lightly, I can tell you that. They played some tough competition early and traveled to some tough places to play, so their record is a little deceiving.”

Iowa will again run out freshman Cole McDonald to the mound. He has posted a 4-1 record this year with a team-leading 1.86 ERA.

Western Illinois will counter with right-hander Ricky Digrugilliers, who is 1-0 with a 5.06 ERA.

The Hawkeyes, who got most of their production out of the top four spots in the order against Kansas State, need to see the bottom half have some better all-around at-bats.

With no more margin for error, the Hawkeyes desperately need to put together a good nine innings against Western Illinois, top to bottom.

The good news for Iowa is it still control its destiny, with series against Ohio State and Penn State, the two teams sitting just ahead of it in the Big Ten, still to come.