Take Back The Night takes downtown 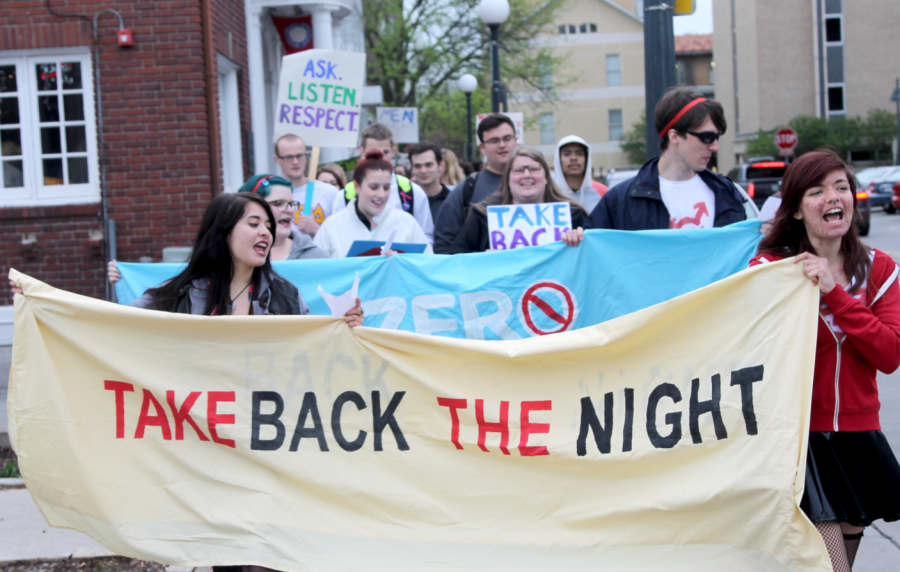 Against the backdrop of a college campus that reported its 14th sexual assault for the 2015-16 academic year last week, more than 100 people gathered to protest sexual violence Thursday evening.

Community members and students came together on the Pentacrest for the annual Take Back the Night Rally.

The event was organized by several advocacy groups, including the Women’s Resource and Action Center, the Rape Victim Advocacy Program, the Domestic Violence Intervention Program, and Nisaa African Family Services.

Take Back the Night events have occurred across the country since the 1970s to protest sexual, relationship, and domestic violence. The name partially refers to the dangers women have faced when walking at night, and the word “night” is a metaphor for fear.

University of Iowa senior Grace Jimenez, who works for WRAC, said Iowa’s first Take Back the Night event was in 1979, and the rally has grown in recent years.

“In the last five years, it’s gotten a lot bigger. It’s become a more prevalent issue on campus,” she said.

Jimenez said the issue of sexual violence is not one that can be taken lightly, and the rally is meant to show community support for survivors.

“One in four women are sexually assaulted in their college careers,” she said. “Women should be able to walk at night and go to a bar without being harassed. It shouldn’t be an issue, but it is.”

During the rally, participants marched downtown as a way of reclaiming the streets. A long line of protesters snaked around the Pedestrian Mall while chanting such phrases as, “People unite. Take back the night.” and “Hey, hey, yo, yo, date rape has got to go.”

They also carried colorful signs and banners with anti-assault slogans painted on them, including “Don’t tell me how to dress. Tell them not to rape” and “Not on my campus.”

The rally also included performances by a spoken word-poet and “radical cheerleaders” from WRAC. The cheerleaders performed their own version of the “Iowa Fight Song,” which included the lyrics, “We’re gonna fight, fight, fight for equal rights, until the patriarchy’s smashed.”

Following the march and performances, a “speak out” session was held with an open microphone. Survivors of sexual violence were given the opportunity to talk to the crowd about their experiences. Emotions were high, and a large number of advocates were on hand to offer support, along with therapy dogs for additional comfort.

Morgan Sedlacek, a volunteer coordinator for RVAP, said she was happy to see a mix of both students and community members at the rally.

“It’s an opportunity to acknowledge that it’s a problem on our campus,” she said. “A lot of times survivors don’t have that safe space.”

Earlier this month, the UI announced the completion of a six-point plan for combating sexual assault on campus. One aspect of the plan was hiring three violence prevention education specialists.

Meagan Schorr, one of the newly hired specialists, said sexual-assault prevention has come a long way under the six-point plan, but things can still be improved.