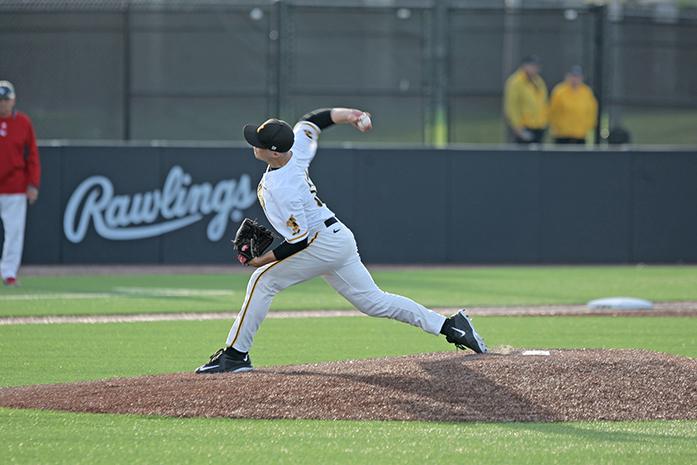 Iowa pitcher Cole McDonald throws out the first pitch during the Iowa-Grand View game at Duane Banks Field on April 26, 2016. The Hawkeyes defeated the Vikings 3-0. (The Daily Iowan/ Alex Kroeze)

It won’t be a Big Ten foe, but this weekend, the Hawkeye baseball team (19-19) is set to host a three-game series with Kansas State(19-22), with the Hawks looking to distance themselves from a .500 record for the first time this season.

The first game is slated for a 6:05 p.m. first pitch at Banks Field today.

Despite the game not being Big Ten competition, the players know that any weekend series is an opportunity to pick up valuable wins.

“You’ve got to treat every game like it’s a Big Ten game,” freshman pitcher Shane Ritter said. “In baseball, anything is possible. Any team can beat anyone. You’ve just got to play your game and play as hard as you can.”

Coming into the contest, the Hawks are batting .268 as a team, compared to .292 for the Wildcats.

The seemingly low team average has been an issue in recent weeks.

In the Hawks’ most recent victory, a 3-0 defeat of Grand View on April 26, the bats went cold once again. Heller said the production at the plate has to improve it the team is to become a legitimate threat.

“On the offensive side, it wasn’t our best performance,” Heller said. “I was a little bit disappointed with the quality of the at-bats we had up and down the lineup … we found a way to win the game but didn’t do much after that.”

Originally, the Hawkeyes had been scheduled for a contest on Wednesday against Omaha; weather canceled the game.

While it was a missed opportunity for the team to pick up another midweek win, junior third baseman Mason McCoy said the cancellation gave the team another day to find the missing pieces to the offensive puzzle.

“[The cancellation] helps a lot, obviously,” he said. “We need to work on getting some things done defensively, get some of our cuts in offensively … I think it’ll make a big difference.”