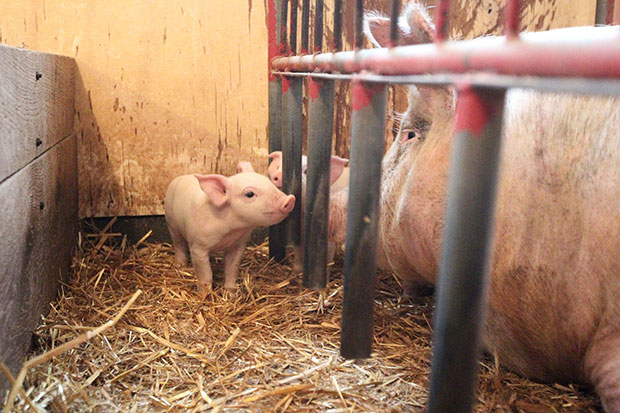 A panel of sustainability advocates wants the world to take a closer look at the way pork is produced in the United States.

In addition to Sethi, the panel included UI alumnus Paul Willis, an Iowa hog farmer, and David Osterberg, a University of Iowa clinical professor of occupational and environmental health. They panelists discussed an alternative market for hog farming and what it would mean for bacon lovers around the world.

Willis is also the founder of the Niman Ranch Pork Co., which has developed a network of farmers who raise pasture free pigs fed on an all vegetarian diet to provide an alternative to the status quo in the hog-farming industry. Pigs are usually held in confinement and don’t have access to clean food and water. He said there’s a problem in the concentration of hogs being killed across the country.

Willis said it’s important to raise animals in a way to show respect for the animal who will make the “ultimate sacrifice” for food.

In order to change the status quo, Osterberg said, people can make effective change by putting pressure on local and nationwide businesses to create a better environment for the stock they use for food at their establishments.

“McDonald’s had so much pressure put on it to change that, and now it has no antibiotics in its supply,” he said.

Business Professor Sara Rynes-Weller, the head of the Tippie Sustainability Committee, said the Tippie College of Business has made strides in the past year to make an effort to raise awareness about sustainability.

“I hope people came away with a much better understanding of what the pork industry is like and learned about what they can personally do to change it,” she said.