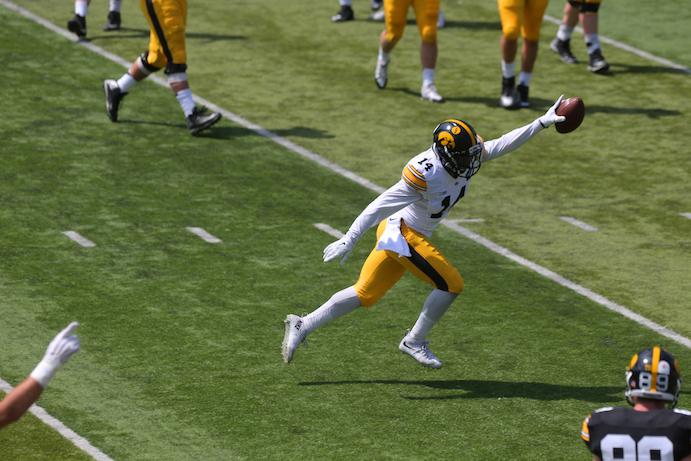 Iowa defensive back Desmond King celebrates after an interception at Kinnick Stadium on April 23, 2016. The defense beat the offense 20-18 in the spring game. (The Daily Iowan/ Alex Kroeze)

It doesn’t matter, of course. The score of a inter-squad scrimmage is rarely the topic of much debate, but in this case it almost perfectly represents the action on the field. Iowa’s offense (without Beathard, who apparently had a scary injury scare earlier in the week) struggled at times to get the ball moving.

There was one significant drive for Wiegers and the first-team offense, an 18-play drive ended by a 40-yard Miguel Recinos field goal. Drew Cook and the second team offense were a mixed bag. There seems to be a new affinity for Iowa quarterbacks to run the ball and Cook did not hesitate to take off.

He’s mobile, a very large player and while not perfect in his mechanics, will be a very intriguing option at quarterback in a couple years.

Iowa’s offensive line struggled a couple times, giving up four sacks. Sean Welsh had a sore ankle and did not practice, so Lucas LeGrand played quite a bit of center. Keegan Render also did not play.

Ferentz on the O-line. Sounds confident James Daniels is coming along well. Welsh had a sore ankle today, btw. pic.twitter.com/rp3OE8HAcC

The secondary continued to look solid for the Hawkeyes, picking off several passes. Michael Ojemudia had one of those interceptions, returning it for a touchdown.

Overall, the defense shut down most of Wiegers targets, forcing him to throw underneath and to his backs quite a bit. Riley McCarron and Jerminic Smith both dropped deep passes, which certainly did not help Wiegers out.

Speaking of wide receivers, Ryan Boyle has switched positions. The former quarterback took some snaps with what was basically the third-team, making two catches — one for a touchdown. Judging from the amount of receivers thrown out on the field, the coaching staff is still trying to figure out what exactly they have.

Kirk on Ryan Boyle. Says the move might not be permanent. pic.twitter.com/MEAb4abXfQ

Tight ends Peter Pekar and Jon Wisnieski got extended looks and were targeted often. While George Kittle is firmly entrenched as the No. 1 tight end, there’s a fairly significant battle brewing behind him for the spot in double-tight end formations.

Kittle, however, continues to look good. He didn’t see a whole lot of balls thrown his way, but his route running and pass blocking have all taken leaps and bounds.

The biggest win for Iowa during the practice? The fact no one got hurt. The Hawkeyes went mostly full contact (QBs were exempt) and everything looked as if it went fairly smoothly.

Spring practice is now over for the Hawkeyes, who will now come back together later this summer.

Time for a few stats: