Help is out there, Jordan Burnham says 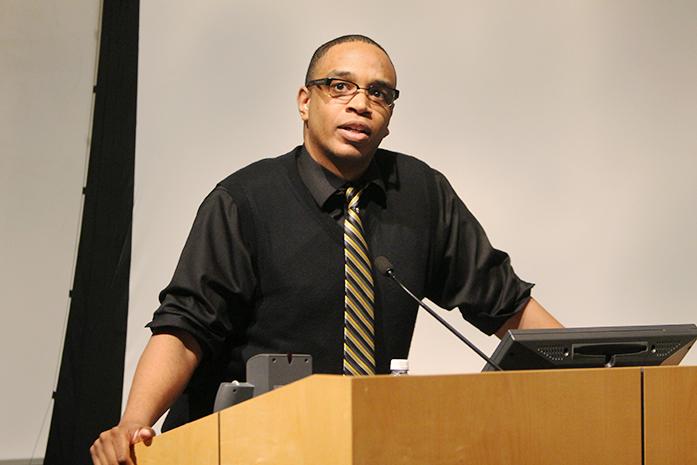 Motivational Speaker Jordan Burnham tells his story of Survival, Recovery and Acceptance in the Pomerantz Center on Wednesday, April 20, 2016. In 2012, Burnham was presented with the Emerging Humanitarian Award form San Fransisco 49ers player Nmadi Asomugha and the Asmugha Foundation. (The Daily Iowan/McCall Radavich)

A tale of survival, recovery and acceptance related to depression could have been truncated by a jump out a bedroom window.

However, Jordan Burnham, eight years after his suicide attempt, was able to share his story of dealing with anxiety, depression, and a drinking problem to a crowd of University of Iowa students Wednesday evening at the Pomerantz Center.

Burnham, a public speaker, said he travels around the country educating young adults on mental-health issues, things everyone goes through — a bad breakup, having a tough time in school, or parents getting a divorce. These are different from mental-health disorders, which include depression, anxiety, and schizophrenia.

“One out of four college students have a mental-health disorder but don’t seek help,” he said.

Burnham started internalizing his depression after moving to a different town when his father got a new job when he was in seventh grade. He said he was going to school with “fake laughs and fake smiles” to hide his depression.

When he was 16, he went to a therapist for the first time and was diagnosed with depression.

“Anyone at any given time can feel depressed during their life — but for the most part, they know why they’re depressed,” he said. “For me, dealing with depression, it’s not whether I’ll wake up with depression or not, it’s the level of my depression that day.”

Burnham attempted suicide his senior year of high school by jumping out of his bedroom window after his father found a duffle bag of alcohol he had hidden in his car. He broke several bones in his body and was given fewer than 24 hours to live.

“When my dad found my alcohol, it was a trigger for me that I didn’t belong here anymore,” he said. “It’s not that I wanted to die — I wanted the part of me with depression to die.”

“Sometimes you think certain problems might seem small, but some issues aren’t so small — they’re big issues for people,” she said.

Luthens said it’s important to have events on campus to raise awareness about mental-health problems because if anyone can relate to the issues Burnham brings to light, students will know “they’re not the only one.”

UI senior Julia Erickson, who as working at the Crisis Center booth outside the event, said she had read a lot about Burnham before attending his event.

“It’s important for people to know there is help out there, and mental health doesn’t have to be a struggle,” she said. “I hope people will learn that it does get better, and Jordan has an awesome story that will resonate with people.”

Burnham ended his lecture by addressing the state of his current mental health in the eight years since his suicide attempt.