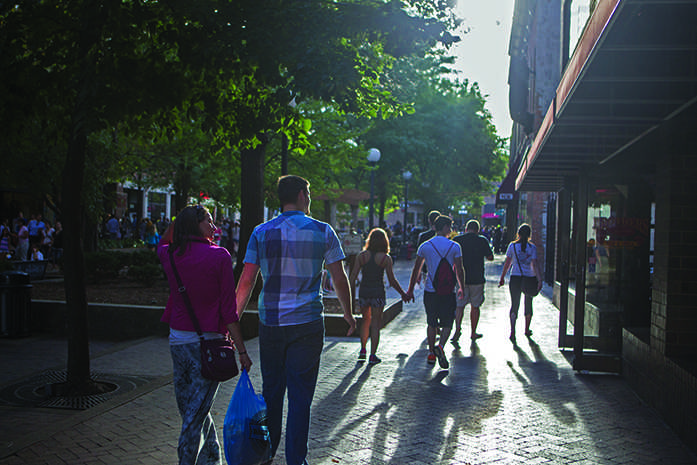 A group of people are shown walking through Iowa City's Ped Mall during Taste of Iowa City Wednesday, August 27, 2014. Taste of Iowa City took place around downtown Iowa City where citizens were able to purchase tickets that they could redeem for food at a stand of their choice. (The Daily Iowan/Sergio Flores)

A zombie invasion is headed to the Iowa City area in the coming months.

The horror-theme restaurant Zombie Burger has announced it will open two new locations: one in downtown Iowa City in August and another one at Coral Ridge Mall to open in mid-September, said Paul Rottenberg, the founder of Orchestrate Hospitality, the company behind the restaurant.

Zombie Burger is known for its unique menu items and spiked shakes. Rottenberg said both locations will be versions of its quick-service Zombie Burger and Shake Lab concept.

“Both locations will have counter service,” he said. “The downtown location will have plentiful seating, a patio and will serve beer and spiked shakes. The Coral Ridge location will be like our Jordan Creek Mall location in Des Moines.”

The burger restaurant’s postapocalyptic zombie-inspired décor has given it a claim to fame in the Des Moines area, and Rottenberg said to expect the same at the new locations as well.

He also said moving into a college town is a new opportunity for the company.

“We’re hopeful we can develop a fan base in Iowa City,” he said. “Outside of the zombie theme we have, our food is all made fresh. We also have sales, vegetarian patties, and other options for vegans. I hope the university crowd enjoys a great shake, because those will be on the menu as well.”

Adam Bartelt, the marketing director for Orchestrate Hospitality, said he agrees with Rottenberg and thinks opening up new locations in a college environment such as Iowa City will be a great opportunity.

“I think the college environment will be more beneficial,” he said. “I envision the downtown location specifically having a close tie with the college community.”

Bartelt said the Coral Ridge location was made possible because of the good relationship they have with the company that owns both Coral Ridge and Jordan Creek. Zombie Burger’s only other current location outside of downtown Des Moines is in the food court of Jordan Creek.

Nate Kaeding, the retail development director of the Iowa City Downtown District, said the district is excited to welcome Zombie Burger to the community.

“Zombie Burger is incredibly popular in the Des Moines area and a great Iowa success story,” he said. “We are excited to welcome them to downtown this summer, and they are a unique and welcome addition to our already vibrant culinary and entertainment scene.”

Kaeding said that when the district posted on Facebook, announcing a downtown Zombie Burger location, it was one of the most shared and viewed Facebook posts in the history of the Downtown District’s organization.