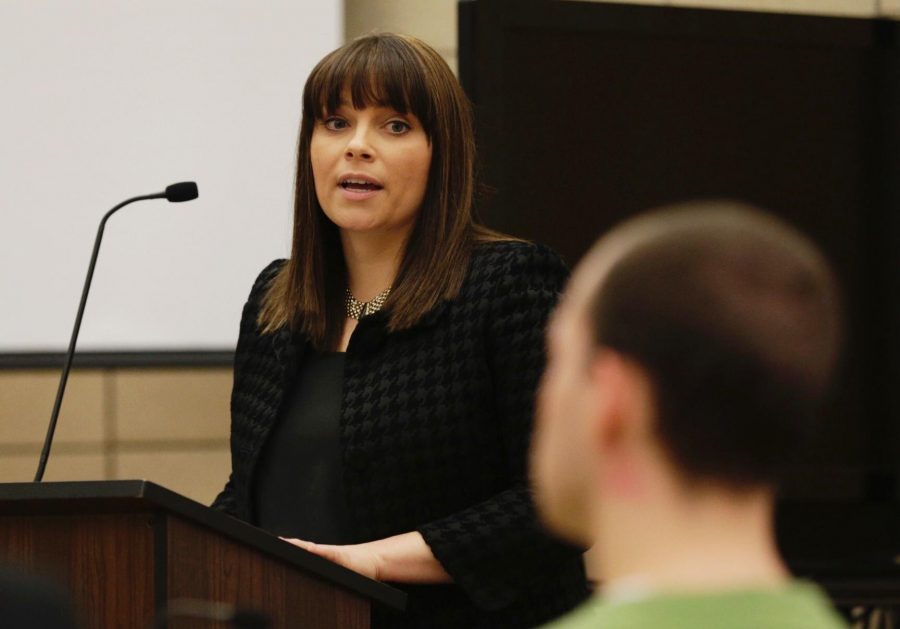 in the trial of Alexander Kozak at the Story County Courthouse in Nevada on Thursday, April 14, 3016. Alexander Kozak is charged with first-degree murder in connection with the 2015 shooting death of Andrea Farrington at the Coral Ridge Mall. (Pool photo by Liz Martin/The Gazette)

NEVADA, IOWA — The prosecution made its opening arguments in the trial of Alexander Kozak, accused of killing 20-year-old Andrea Farrington at the Coral Ridge Mall last year, just before the lunch recess.

The defendant remained still, and stared straight ahead as he listened to Naeda Elliott, assistant Johnson County attorney, make the case as to why the jury should find Kozak guilty for the murder.

“She had committed what the defendant considered to be a cardinal sin, she had bruised a man’s pride, this man,” Elliott said, indicating towards Kozak.

According to the prosecution Farrington and Kozak began communicating through text in February 2015. Elliott said although there was interest in being more than friends, Farrington was in a relationship and Kozak was a married man.

Despite their texting relationship, the two never spent time together outside of work and never had a physical relationship, Elliott said.

Their texting continued until late April, when the prosecution said it dropped off until around June 5, a week before the shooting. On June 11, Farrington texted Kozak to tell him his texts were “creeping her out”, this caused Kozak to become angry, according to Elliott.

The next day, June 12, was supposed to be Farrington’s last day at work at the Iowa Children’s Museum, she had also just broken up with her boyfriend and was moving back to Grinnell, Iowa, with her parents to try and save some money, it was also the day she would be shot and killed, Elliott said.

“On June 12, Andrea Farrington started her day like any other, she was on auto-pilot,” Elliott said. “She didn’t know it would be last time she would take a shower, put on makeup, put on her jeans and purple children’s museum shirt, then get in her car and drive to work.”

Elliott went on to describe how Kozak allegedly formulated the plan to kill Farrington while he was still at work, even texting a friend to tell her what he was about to do.

“I’m going to go home, get my glock, and shoot Andrea Farrington,” Elliott said the text Kozak sent to his friend said.

Elliott said Kozak then went home, changed out of his mall security uniform, and into an all black outfit he had worn the night before during dinner with his wife: black jeans, black shirt, black vest, and a black fedora. He also grabbed his 9 mm glock, along with four fully loaded clips, and an ammunition box with 200 additional rounds in it, according to the prosecution.

Kozak then, according to the prosecution, drove back to Coral Ridge Mall. While parking his blue Kia in a handicap spot closest to the entrance where Farrington worked at the information desk for the Children’s museum, he caught the attention of several witnesses, Elliott said.

“Just before 7:30, the defendant readied himself in his car, put on his fedora, exited the vehicle with eyes dark and focused, and headed towards the mall,” Elliott said.

The prosecution described how, once inside the mall Kozak walked up behind Farrington while she was talking with two of her friends and shot her three times in the back.

According to Elliott, several witnesses saw Kozak just before or after the shooting, and almost all of them knew something was wrong.

Kozak was arrested on highway I-80 by a state trooper who recognized his vehicles description, where, according to the prosecution, confessed every measure he took to kill Farrington.

The defense will make their opening arguments after lunch.