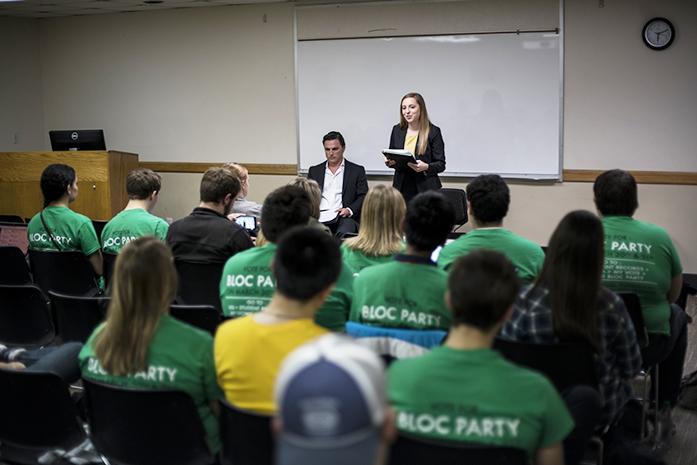 The vice-presidential candidates in this year’s University of Iowa Student Government election went head to head in a debate on Monday, in which one emphasized her experience and the other his potential for freshness.

Freeman referred to her party’s platform several times throughout the debate and said she understood the bureaucracy of UISG.

According to the party’s platform, BLOC aims to create an undergraduate housing task force. It also proposes increased meal-plan options.

Freeman, a junior, indicated that being president of the UI Democrats and participating in Hawk the Caucus have prepared her to take on the vice-presidential role. While she acknowledged it can be a vague position, she said, it could be advantageous by enabling a focus on specific issues.

“While our opponents will spend months figuring out how UISG works, Rachel and I can hit the ground running on Day 1 and work to enact the platform we set forth,” she said.

UI junior Smith said previous leadership positions that have prepared him for a vice-presidential role are being the founder and president of the Iowa Wrestling Club and Moneythink Iowa chapter.

Smith also said he felt “in some ways, personally attacked” for wanting to advocate on behalf of students during his closing statements.

“I feel like getting up here, what we have to say, is being shot down at its face value because our résumés don’t stack up, and that bothers me,” he said.

As part of a notion Smith called “servant leadership,” Smith and Langel have both both pledged to forgo the salaries allocated to UISG presidents and vice presidents.

According to the UISG website, the UISG 2015-16 salaries for president and vice president were both $8,377.50. If these figures continued next year, Langel and Smith would pass up on $16,755.

“We have a philosophy that if we bring our hard work, determination, efficiency, and above all, just a positive and great attitude, we can make a great impact on any organization we set our mind to,” he said.

Both parties indicated an interest in holding external office hours to hear the voices of students on campus.

While BLOC has 36 senatorial candidates, Yes has none.

Evan McCarthy, the UISG chief of staff, said if Yes wins the election, which takes place Wednesday and Thursday, all the BLOC senatorial candidates would basically have guaranteed spots on UISG.

“If there were a situation where the Yes Party executive team were elected, they would have the BLOC Party Senate team and whatever independent senators might get a seat to work with,” he said.