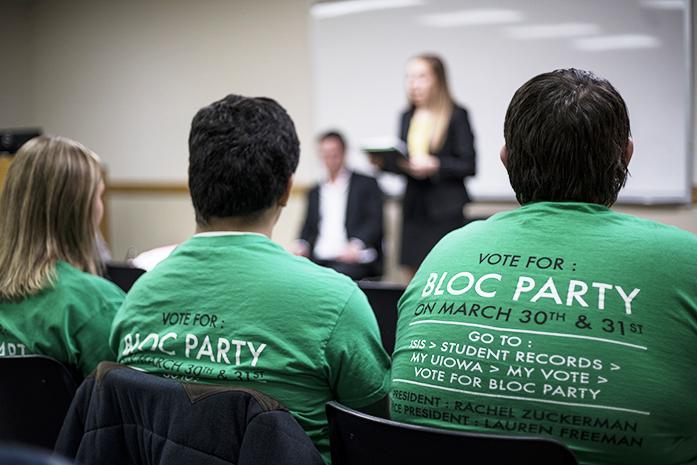 Some student leaders on campus are hoping to bring change to the University of Iowa Student Government.

With the UISG elections just around the corner, the Bettering Lives On Campus Party, more commonly known as BLOC, is excited about the voting to start on March 30.

UI junior Freeman said BLOC has spent a lot of time preparing for the ballots to be cast.

“Generally, we have six focus points: student life, diversity, safety, academics, sustainability, and accessibility,” she said. “We took a lot of time to get these platforms established and to propose initiatives for them.”

Freeman said she is really excited for the party’s protection policy and the projects BLOC pushed forward for it.

Part of that policy includes the Speak Out survey, which was sent out to students by BLOC a few months ago. The survey has prompted students to talk about safety on campus.

With results from the survey arriving sometime in April, Freeman said, she hopes to gain new ideas about increasing security on campus based off of the responses.

“Another thing we plan on doing to make Iowa safer is holding administration responsible for the six point plan that was started by Sally Mason,” Freeman said. “We haven’t heard an update on the plan in over a year, and we want to start combatting against sexual assault and abuse as soon as possible.”

“The four cultural-resource buildings on the West Side of campus are in bad shape,” she said. “They have leaking roofs and poor hours — generally they’re just not well kept. We want to restore these buildings and make it more accessible to students so they can have a great place to turn to.”

Mariah Prendergast, a nominee for one of the UISG senator positions, said she contributed a lot to student affordability, because it is one of BLOC’s main goals to help with student costs.

“I also gave ideas for more options for meal plans, and I proposed having longer hours for the on-campus dining facilities,” Prendergast said. “I pushed forward initiatives to improve Cambuses to have a more time sensitive schedule, as well as improve bus routes to get people where they need to go more efficiently.”

Prendergast said BLOC would work together to improve policies as a whole.

“One of our major issues is mental health,” she said. “We have a lot of different platform ideas to help erase the stigma of mental health and having more effective treatments across campus, which can range from having more therapy dogs on campus and more outdoor yoga to having more counselors available.”

Akash Bhalerao is also running for a senate positon on behalf of the BLOC Party. Working to make campus more sustainable, as well as targeting mental health issues, Bhalerao said, he believes student involvement is the most important aspect to making student government work.

“I feel like BLOC can really make a difference in the student government, and that’s why it’s so important that people vote,” he said. “We are really influenced by students’ needs and wants, so it’s essential that they communicate with us. There’s a lot of funding that goes into student government, as well as a lot of thought, and I think students would really appreciate seeing all of the hard work and energy student government puts into their projects pay off.”