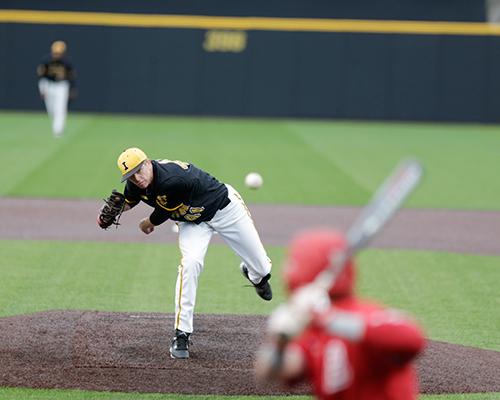 And just like that, the opening weekend of the Big Ten baseball season is here. The Iowa baseball team will open conference play this weekend with Maryland coming to town.

The Daily Iowan staff takes a look at how each team stacks up.

The Wolverines were picked by both Perfect Game and the Big Ten coaches to finish at the top of the league. Michigan is yet to play a game in Ann Arbor and still boasts an impressive record that includes wins over No. 17 California and No. 22 Oklahoma State.

Picked to finish seventh in the conference by Perfect Game, the Spartans have been the surprise of the Big Ten thus far. The toughest part of their schedule is ahead of them, but the Spartans’ body of work cannot be ignored.

The Terrapins got off to a bit of a rocky start, going 5-7 through their first 12 games. The preseason pick to finish second in the Big Ten is playing good baseball now, though, taking two of three from No. 23 Cal State-Fullerton last weekend.

The Cornhuskers have played eight games versus ranked teams this season, so their 13 wins are pretty impressive; wins against the College of Charleston, Tulane, and Long Beach State have been the highlights. Nebraska has won its last four games and 10 of its last 11.

Six losses at the beginning of the season at the hands of Middle Tennessee and Cal State Fullerton will put a damper on your record. Indiana has won six of its last seven, though, and it is led by Craig Dedelow, who is hitting .338 with 10 extra-base hits.

The Buckeyes have won five straight and look good heading into the Big Ten season. Picked to finish eighth in the conference, wins against Coastal Carolina and Seton Hall have the Buckeyes trending upwards.

Illinois is coming off a historic 50-win season, and the Illini had three preseason first-team All-Big Ten selections. That is why they are here in the power rankings despite their losing record. The talent is there, and at some point, it will erupt.

See: Illinois. The Hawkeyes have not performed to what was expected after a 41-win season in 2015, but the schedule has been tough. Series sweeps at the hands of Dallas Baptist and Missouri State have been disappointing. Gut feeling is telling me the Hawkeyes will turn it around.

The 10-8 record may lead people to believe the Gophers should be higher on this list, but they have not played anybody yet. A close loss to Oregon State early in the year is the best competition they have played.

The Nittany Lions got to take a trip to Cuba this spring to play a few Cuban teams. That will be the most memorable part of their season.

The Wildcats have lost five straight and 11 of their last 12, and they are trending in the wrong direction.

The record speaks for itself, and the Boilermakers haven’t played world-beaters. Purdue traveled to Cal-Berkeley this spring and was outscored 29-5 in three games.