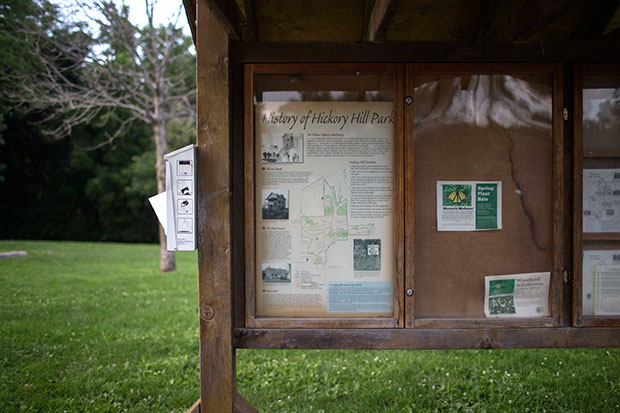 Officials are developing a master plan for improving Hickory Hill Park. Iowa City officials are encouraging the public to give their input on what they would like to see enhanced in the 185-acre wilderness area.

A public meeting was held March 13 for people to voice their opinions, and another will be scheduled sometime this spring.

Iowa City Parks and Recreation Director Juli Seydell Johnson said the money was allocated as part of the city’s capital-improvement plan. The city is expecting to spend $200,000 annually on the park for the next three years, and improvements will start in late summer or early fall.

While other local parks have smaller projects taking place, such as the building of a playground at Mercer Park, Johnson said the size and popularity of Hickory Hill made it an important item on the agenda.

“A lot of users just love that park,” she said. “It’s a park where the trails need some work done to keep them safe for everyone, so I think that’s why it moved up on the priority list.”

Johnson said many of the park’s trails are experiencing issues such as erosion, so efforts will be made to determine what level of maintenance they need. Additionally, some trails will be made more accessible to those with disabilities.

“Some are going to be paved where people can easily access areas of the park and experience the park no matter what type of mobility issue they may have,” she said.

“We fear that people get lost in the park, it’s so big and full, and people wander around,” she said. “It’s a beautiful natural area; we just want to make it safer and more comfortable for people who want to go explore on their own.”

Dan Marner, a landscape architect with Cedar Rapids-based Snyder and Associates, is in charge of developing the master plan for the park. He has collected input from citizens and said everyone he’s heard from wants to keep the space as natural as possible for activities such as hiking and bird-watching.

“Passive use is what this park is intended for. So no ball fields or anything,” he said. “Everyone wants to keep the park similar to the way it is today, just with some enhancements.”

In addition to trail restoration and signs, other improvements could include the fixing shelter areas, repairing bridge crossings, and creating spaces to be used by Boy and Girl Scout troops.

Marner said there’s also been some interest in building a natural playground that fits the theme of the park.

“You could spend millions of dollars on a park like this, so we really want to focus on what the priorities are and making improvements that the city can maintain over time,” he said.

Andrew Hirst, a University of Iowa student who enjoys running Hickory Hill’s trails, said he supports keeping the area as natural as possible.

“The prairie reserves and the prairie grass plot they have planted there is wonderful, and I’m always excited to see those come up every spring,” he said. “It’s a wonderful weekend getaway. It’s a little slice of nature in the middle of the city.”