Blum sticks to his guns 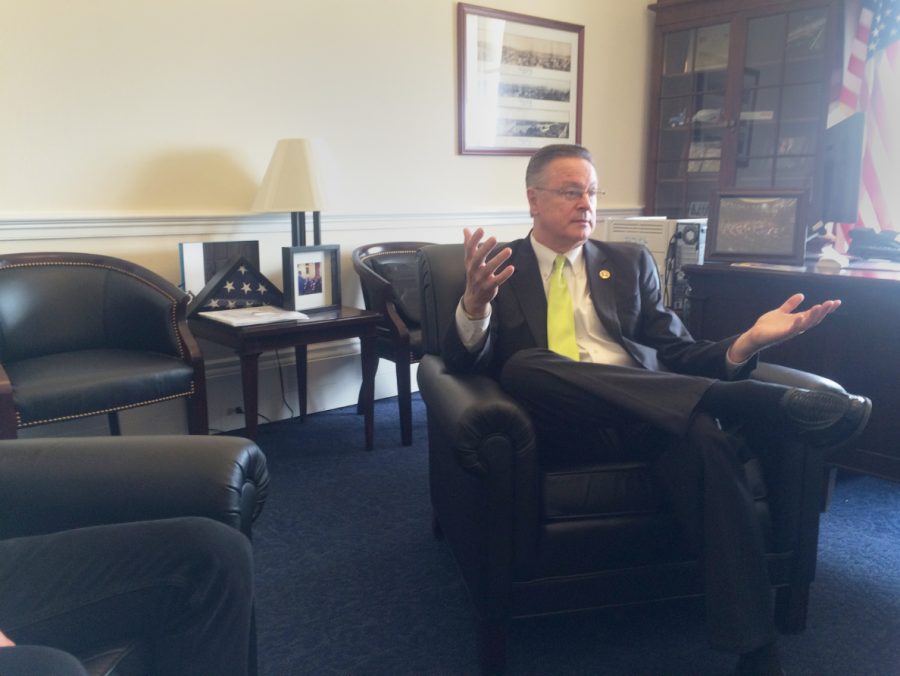 WASHINGTON, D.C. — Freshman Rep. Rod Blum, R-Iowa, has a bullseye on his back heading into the election this fall — and he couldn’t be happier about it.

“I love it. I love being a target. What are we, third, fourth?” Blum asked one of his staffers, sitting opposite of him in his office on Capitol Hill, just how “at risk” his seat was.

“It goes up and down,” the staffer replied. Blum shook his head.

Democrats, both in the Hawkeye State and nationwide, have been gunning for Blum’s seat in Iowa’s 1st Congressional District for most of his first term. Monica Vernon, a Cedar Rapids city councilor and mayor pro tem, announced her challenge to Blum fewer than two weeks after he took office.

“She knew Rod Blum wasn’t going to represent us in Washington, and she rolled up her sleeves and got to work,” said Michelle Gajewski, Vernon’s campaign manager.

At the time, Vernon was coming off of two losses in the 2014 Iowa elections — the first in a 1st Congressional District primary showdown among five other Democrats and the second from her lieutenant-governor spot on the Democratic gubernatorial ticket she shared with state Sen. Jack Hatch.

Iowa state Rep. Pat Murphy, who emerged victorious from the robust Democratic primary in 2014 only to lose the 1st District to Blum, will challenge Vernon once again for the nomination this year.

Both Democratic challengers agree that Blum’s victory in 2014 was something of a fluke. Surprisingly, Blum agrees — somewhat.

“It’s a Democratic district, that’s why,” Blum said. He continued, however, by noting the strong contingency of independent voters in the northeastern Iowa district guaranteed his win.

Voters registered as “no party” made up roughly 40 percent of active voters in the district in March, no more than Democrats or Republicans, according to data from Iowa Secretary of State’s Office.

So how did such a promising Democratic field fail to defeat Rod Blum two years ago, in a district full of purple voters?

Mike McLaughlin, Murphy’s campaign manager, called the loss just another casualty in a bad year for Democrats in Iowa.

“We had the lowest turnout since World War II,” he said. “We certainly weren’t helped by the Hatch-Vernon ticket being the worst performing Democratic ticket in state history.”

Others attribute Blum’s victory to his willingness to go negative — something Democrats weren’t willing to do.

“Pat Murphy had a really strong philosophy of not getting down and dirty in the campaign,” said Walt Pregler, the chairman of the Dubuque County Democrats.

Blum wasted little time getting to work in Congress doing the one thing he promised Iowans on the campaign trail: cleaning up Washington

In just his first week, he managed to cause a stir on the Hill by voting against then-Speaker of the House John Boehner, who had stumped for Blum on the campaign trail just months prior.

“A lot of people thought we were misguided to do that, but at the end of the day, we’re still here, and he’s gone,” Blum said “And every day that went by validated, in my mind, that the vote was correct.”

Blum said he took issue with Boehner’s leadership style, which he called vindictive and “top down.”

“I think the former speaker had an enemy’s list,” Blum said, raising his eyebrows suspiciously. “If you didn’t toe the line, there was retaliation. They’d yank people off committees and negatively affect fundraising.”

Another bill would enact a pay cut for members of Congress for each year the budget isn’t balanced; “5 percent the first year, 10 percent every additional year,” Blum said, unable to keep a mischievous grin from spilling across his face. “I love it. I just love it.”

Recently, he’s even gone so far as to suggest that Washington needs a “recession.”

In a March 21 tweet, posted a picture of construction taking place on the Wharf — a mile-long waterfront neighborhood in Washington — with a caption that read “Washington, D.C., is booming … Being built on the backs of US taxpayers. D.C. needs a recession.”

Democrats see this as further evidence that Blum needs to go, and they are much more optimistic about their prospects this year.

“It’s a much better environment for Democrats all across the board in 2016,” McLaughlin said.

Not only is Blum feeling increased pressure from Democrats, but he is fighting for support from his own party.

“He has not gotten the financial support, and the Republican Congressional Committee has not really helped him,” Pregler said.

Blum, sitting in a substantial leather chair in his impressive office in the Cannon House Office Building, isn’t worried. He glances around, shrugs.