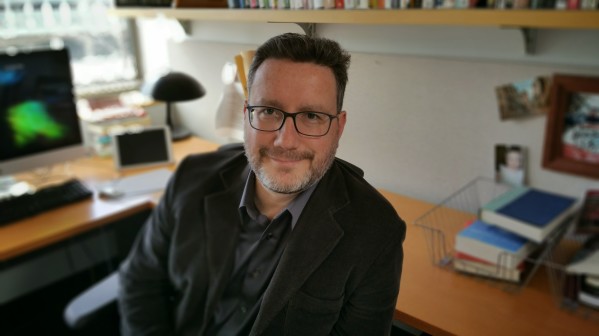 Another Democrat has announced he’s running for Johnson County Supervisor.

Jason Lewis, the director of the Writing and Humanities Program at the University of Iowa Carver College of Medicine, recently announced his candidacy.

Lewis, who has run for the Iowa City School Board in the past, said it became clear to him there are a lot of issues that have to do with the school and the community that are bigger than the School Board, which he hopes to focus on.

“I see a lot of child-welfare issues in the center of our community, and it crosses over into poverty, racial justice, and social justice,” he said.

Other issues Lewis wants to focus on include rural development, supporting the housing stock in the county, and issues regarding infrastructure. He also wants to see more support in the arts.

“A lot of times, we don’t support the arts as part of what we do throughout the county, and I want to be a champion for that,” he said.

Lewis said he and his wife are foster parents, and his wife works at Four Oaks, so their lives involve helping people in need every day. Lewis is also a writer and a musician and thinks his creativity is a key trait in why he should be elected as a supervisor, as well as his ability to help people in need.

“My creativity makes me successful as an administrator at a major university, and I feel I could bring this to the Board of Supervisors,” he said. “Also, compared to a lot of people who run for these offices, I’m 44 years old, so I’m young for this, and I think that’s valuable.”

The diversity of what he has done in his life is what Lewis said he is proud of.

“I lived in New York City for 11 years, working in publishing and advertising as an editor. At the same time, I was also a semi-pro musician,” he said. “Our band didn’t have external funding, but we built the band up so we could tour overseas and release a couple albums. The execution was through the leadership I was able to provide.”

Lewis said there is one thing he is most proud of however, over all other accomplishments.

“Being a teacher both in the classroom or one on one with students who need someone to talk to,” he said. “When you see the light turn on for anyone, and they see something they haven’t seen before, and it changes their life or outlook on things. That’s what I’m most proud of.”

Andre Perry, a longtime friend of Lewis, said they both moved to Iowa City the same year, and he believes Lewis is very involved in the community.

RELATED: Lisa Green-Douglass to run for full term on Board of Supervisors

“He has been very passionate about making the community the best it can be and he will do his best to serve different sides of the community,” he said.

Current Johnson County Supervisor Mike Carberry said he’s known Lewis for a long time and first met him through his music and writing and was not surprised he ran for School Board in the past.

“I always thought he was a very thoughtful, intellectual guy,” he said. “I read some of his writing and saw he had some deep thoughts. When he ran for School Board, he took those deep thoughts and decided to do something about it. He saw wrongs he wanted to right.”

Carberry said some of the issues of interest to Lewis are now bigger than the school and are that of county, state, and even federal scale.

“Childhood poverty, education and other social services are all things Jason is interested in,” he said. “I think he knows he can do good work at the county level right now and I was really happy when he called me and said he was running. We agree on a lot of things, and I’m going to try to help him get elected if I can.”

Lewis said he recognizes not everybody has the same background or values as he does, and he thinks the job of anyone who serves the public is to make opportunities available for everyone to succeed.