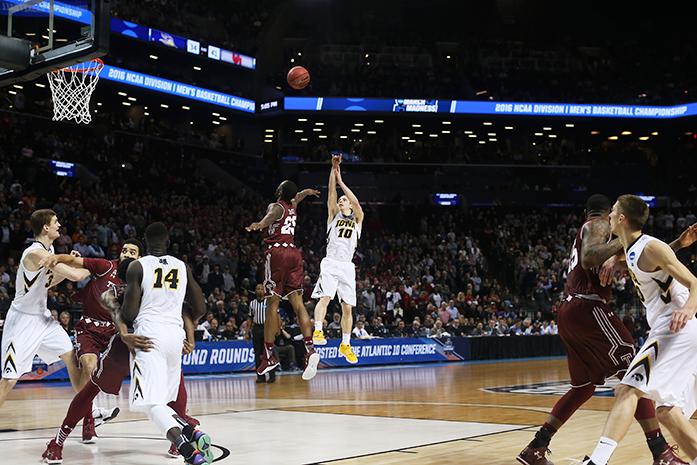 Iowa Hawkeyes guard Mike Gesell (10) shoots against the Temple Owls in the Barclays Center on Friday, March 19, 2016 in Brooklyn, New York. The Hawkeyes beat the Owls in overtime, 72-70. (The Daily Iowan/Joshua Housing)

The Iowa basketball team left the floor for the final time of the 2015-2016 season on Sunday, and for some historic seniors, the final time in their careers.

Fans may be eager to move on to another season, but first: an homage is due to a senior class that many believe triggered a resurgence in the Hawkeye program.

Jarrod Uthoff, Mike Gesell, Anthony Clemmons, and Adam Woodbury formed 80 percent of a starting lineup that led Iowa to one of its most promising seasons in recent memory and its second-straight appearance in the second round of the NCAA Tournament for the first time in 18 years.

The class accrued 89 wins in its time at Iowa, the third-best program mark for a group of seniors all-time, and although the past three seasons have finished on sour notes, they’ve irrefutably left the program in a better place than where they found it.

Uthoff, the poster boy for 2015-16, was 2011’s Mr. Basketball in Iowa and transferred from Wisconsin in 2012. He was not only a unique talent but a unique character who set the tone for the Hawkeyes both on the floor and in dealing with adversity.

Collecting awards and posting big numbers came naturally to Uthoff, but they were literally the furthest thing from his mind. His stoic composure was his defining quality, and the key component to his production this season. He only ever wanted to win. Only.

Asked how he wants to be remembered historically, he responded in perfect Uthoff fashion:

“I have no words for that right now. I’m just upset we didn’t win.”

Uthoff was an exemplary student, named an Academic All-American along with Gesell, who was a four-year starter in his Iowa career. Gesell had an opportunity to go to Stanford out of high school but felt a calling to McCaffery and the Hawkeyes.

“Coach McCaffery really sold all of us on that vision that he had for this team, to rebuild it to where Iowa once was,” Gesell said. “We made strides every single year, and look at the team we have now.”

Gesell set the Iowa single-season record for assists sharing point guard duties with Clemmons, who at times felt like a forgotten man but took advantage of his only high-level scholarship offer to be a valuable floor general and defensive stopper.

He played on the same high-school team as Michigan State stars Denzel Valentine and Bryn Forbes, but not even his home state Spartans or Wolverines took a chance on him. Iowa did.

“I prided myself on winning since I stepped on campus; that’s been my identity, that’s what I wanted to do,” Clemmons said. “The goal was to win games … and I think that’s what I did.”

Woodbury, from Sioux City, passed on a scholarship offer from No. 1 seed and current Sweet 16 team North Carolina to play for his beloved Hawkeyes.

“[It’s meant] everything [to be a part of the program],” Woodbury said through red eyes. “I grew up a Hawk fan, got to play four and a half hours from my hometown. It was a special four years.”

Woodbury caught a lot of criticism, but the reality is that he was a legitimate 7-footer who ran the floor, stayed healthy (he made the most career starts in Iowa history), was a leader on and off the court, and always undeniably gave the Hawkeyes everything he had. Most schools would sign without reading to have that, and Iowa fans would be remiss to remember him anyway other than admirably.

“Whatever you guys think about me is fine,” Woodbury said. “What I’m going to think about my guys is that we always worked hard every day. I’ll always love those guys.”

Graduating class of 2016, from the Iowa community; thank you. And from McCaffery: