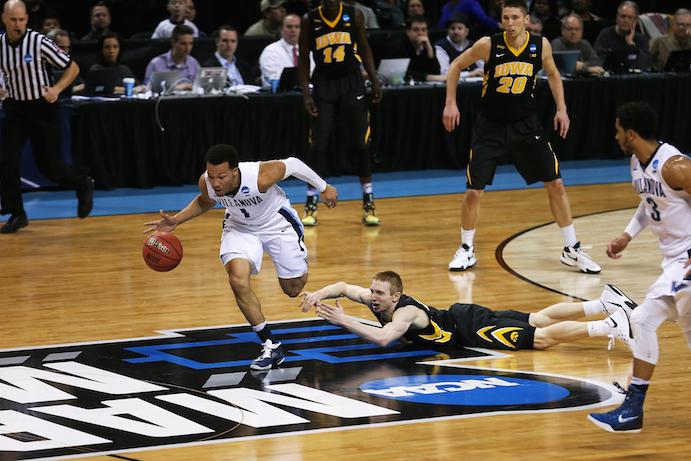 BROOKLYN, New York — Iowa’s basketball season came to a, perhaps mercilessly, merciful end on March 20, as the Hawkeyes fell, 87-68, to Villanova in the second round of the NCAA Tournament.

Iowa kept it close early, tying the game at 13 on a Dom Uhl 3 roughly seven minutes into the game, but Villanova’s advantages were already clear.

The Wildcat guards penetrated the lane at will early in the game, and though the score was close, the Villanova defense hounded the Iowa ball handlers as soon as they approached the 3-point line.

Iowa committed 8 turnovers in the first half, which led to 12 points for the Wildcats, and furthermore, the Hawks were forced into a zone defense that opened things up for Nova from the outside.

The Wildcats rained 3s in the first half, going 7-of-12 while getting plenty of easy looks at the basket. Their offense was as crisp and efficient as advertised, shooting 60 percent from the floor en route to a 54-29 advantage at halftime.

Iowa never hadn’t done itself any favors, without a single free throw, fast-break point, or second-chance point, and although the Hawks closed the gap slightly in the second half, the game was decided in the first 20 minutes, if not after the first seven.

Villanova finished the game shooting 59 percent from the field and 52 percent from deep, while Iowa sat at 44 percent and 29 percent.

Jarrod Uthoff had 16 points, and Nicholas Baer had 15.