Breaking down Iowa vs. Villanova 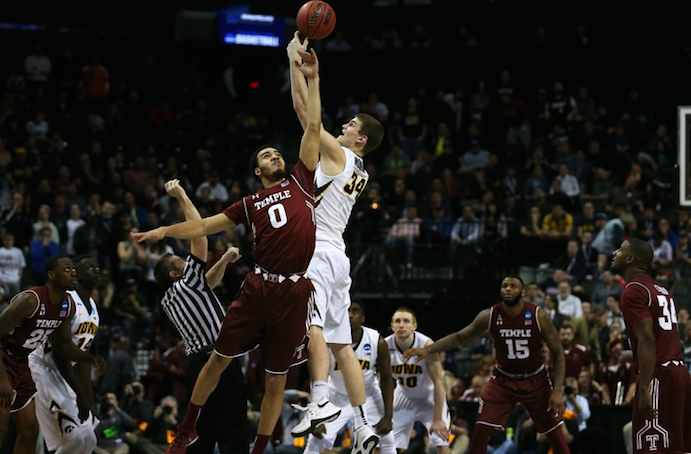 Villanova is efficient on both ends but admits that Iowa has some advantages.

BROOKLYN, New York — After downing Temple in dramatic fashion on March 18, the No. 7 seed Hawkeyes have their hands full with No. 2 Villanova. Despite disappointing finishes in March, Jay Wright’s team has been one of the best regular-season teams in the country in recent years, and the numbers say 2016 is no exception.

The name of the game for Villanova is efficiency. The Wildcats have a true shooting percentage of 116.2, good for 16th in the nation, and both their leading scorer (Josh Hart, 15.5 points per game on 51 percent) and primary post player (Daniel Ochefu, 61 percent) make more shots than they miss.

All of Nova’s starters are offensive weapons, but what is going to be most problematic for Iowa, struggling as it is to score points, is Villanova’s elite defense.

The Wildcats led not only the Big East but the nation holding opponents to only 65.9 points per game. Furthermore, while Iowa has shot only 40 percent from the floor over the past nine games, Villanova is 23rd in the country, holding teams to just 39.9 percent shooting.

Villanova is both guard-heavy and experience-laden, with senior Ryan Arcidiacono leading a tenacious perimeter defense with 1.4 steals per game.

Arcidiacono makes the offense go, dishing out more than 4 assists per game to a team that led the Big East in made 3s per game (8.6).

Junior guard Hart, however, makes the offense flow so efficiently. Shooting 51 percent from the floor and 37 percent from deep, Hart is the cog to the Villanova offense and also a premier perimeter defender who will likely spend a lot of time on both Peter Jok and Jarrod Uthoff.

Kris Jenkins functions as a stretch 4, standing only 6-6 but weighing 240 pounds and shooting 37 percent from beyond the arc. He doesn’t do much damage posting up, however, leaving both offensive and defensive paint duties to Ochefu.

Checking in at 6-11 and 245 pounds, he grabs 7.6 rebounds and blocks 1.4 shots per game, anchoring a stingy defense and allowing perimeter defenders the ability to take chances on steals and at the 3-point line.

The Wildcats – however, as efficient as they are – are not immune to everything. They shoot the 3 in great volume, but their 33.5 percent collective clip from deep was 234th in the country. Despite that, not possessing great size, 786 attempts from the outside was the 25th most nationally.

They were the third most efficient team on 2-pointers, but have to rely on the 3 to keep the — at times, four-guard lineup — in rhythm. They score fewer than half of their points on the inside, and defenses that have kept the 3-ball at bay have found themselves handing the Wildcats their four losses this season.

While Iowa has struggled offensively recently, if its defense can return to early season form, it can stay within striking distance. Much to the pleasure of Fran McCaffery’s Hawkeyes, Wright himself admits that Iowa bears a resemblance to teams that can give his team problems.

Where are Iowa’s advantages?

Statistics won’t suggest that Iowa has any one clear advantage over Villanova, but one element that will be very much in their favor will be the Hawks’ size advantage.

“Both ends of the floor, Uthoff, we don’t have a body like that,” Wright said. “We don’t have a guy that has that length and is strong enough. Mikal [Bridges] is long, but he’s real thin. If [Uthoff] takes us up at the basket, he’s going to cause real trouble. On the other end … they intelligently have mobility to play on the perimeter and contest 3s. Those kinds of teams give us trouble.”

“They are thick, strong, tough men. So I can’t imagine that’s an advantage for us.”

What does Iowa need to do?

As Wright suggests, if the Hawkeyes want to find success on the offensive end, they’ll be best suited to drive to the basket. However, as the Hawkeyes’ shooting numbers have fallen, they seem to shoot more and more from the outside

Uthoff and Peter Jok, whose length Wright also identifies as a matchup problem, hoisted 10 3s each in the March 18 game against Temple, hitting on only 5 attempts. Still, rather than redirect their attention to the inside, Uthoff continued to seemingly move farther back on every shot, and Jok attempted only five 2-point field goals all day.

“A shooter’s got to shoot” is an adage in basketball, especially come March, but at times against Temple, it seemed that Iowa was trying to shoot itself out of a slump, even as the Owls came roaring back down the stretch.

“I was open, so I shot, that’s just the way it was,” Uthoff said. “They leave me open behind the 3-point line, I shoot.”

Uthoff is as good of a pure shooter as the Big Ten had to offer in 2015-16, but even he has slumped recently. Particularly against a team such as Villanova, which has an admitted weakness on the inside, the Hawkeyes may be forced to make an adjustment that neither Uthoff nor McCaffery have appeared willing to make.

“When you have a guy like Jarrod, not one time in the time that I’ve coached him have I said, ‘OK, that’s a bad shot, don’t shoot that shot,’” McCaffery said. “He will pull up from 30 [feet] and shoot the ball, and he’s made some, and he’s missed some. But he didn’t look over and say, ‘Hey, is Coach going to be upset with me now?’

McCaffery is well-known for letting his players play, but at times over the past month and a half, maybe the team would have been better off getting a kind reminder that shots closer to the basket are typically easier to make.

Defense will be the focal point of this game for both teams, but the key for the Hawkeyes will be that if they want to win, they’ll need to be much closer to 50 percent than 40 percent from the floor. With that said – for once, if the 3s aren’t falling, they’ll need to drive to the hoop.