Hawkeyes stagger into second round 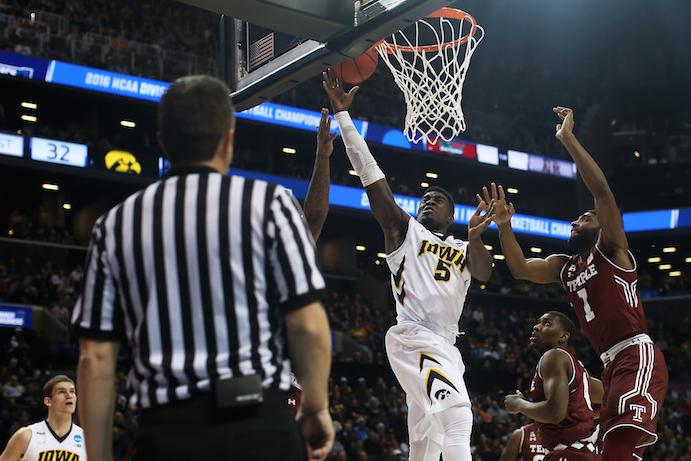 Iowa won an NCAA Tournament game for the second year in a row, but all is not well.

Let’s just get this out of the way.

Iowa won its matchup with Temple in the first round of the NCAA Tournament in Brooklyn on March 18 and is now headed to the second round for the second-straight season. Great work. Stupendous.

It should be made clear, however, that if the Iowa team that just “beat” Temple shows up on March 20 against No. 2 seed Villanova, the Hawkeyes should know that there are extremely strict laws against human sacrifices in the state of New York.

The Hawkeyes needed overtime and a miraculous air ball falling perfectly into Adam Woodbury’s fingers in order to eek out a win over the Owls, which in an ironic way made it seem like the brick laying they’d been doing all afternoon eventually worked in their favor.

Iowa finished the day at a lukewarm 40 percent shooting from the floor, including 30 percent in the second half and 28 percent in overtime, as well as 25 percent (7-of-28) from beyond the arc.

Some may look at that and say, “Hey, they didn’t even play their best game, and they still won,” but the trouble comes in wondering what Iowa’s “best game” is anymore. The Hawks haven’t looked at all impressive for more than a month, and despite the March 18 victory, they don’t look to be improving in the slightest.

In fact, in Iowa’s 2-5 finish to the regular season (plus the opening-round loss in the Big Ten tourney, it shot 40.9 percent from the floor; 40.6-percent is, albeit slight, a regression. The 33.5 percent shooting from deep in that span would have been a welcome improvement over what they produced on March 18.

Iowa had allowed an average of 36 rebounds per game, before being abused on the boards by Temple, which outrebounded the Hawkeyes 49-38 with their starters alone (41-38), and almost only with their top-four rebounders (37-38).

To their credit, the Hawkeyes committed only 3 turnovers all game. They also got 13 points from their bench, a slight increase over the 9 it had averaged in the past eight games. Those positives were lost, however, given that they nearly lost to a team they realistically would have embarrassed in February.

Iowa’s struggles are both extreme and widespread, but one thing is for certain: Villanova will run Iowa out of the gym on March 20 if the shooting woes continue.

Villanova has been one of the better offenses in the country for several years, and McCaffery calls it “the gold standard in the Big East.” In 2016, head coach Jay Wright has as good of a team as he’s ever had.

A healthy portion of that efficiency comes from the Wildcats leading the Big East in both 3s made per contest and free-throw shooting percentage.

Iowa won’t be too stoked to find out that Villanova also boasts the stingiest defense in the Big East (63.7 points allowed per game), but the cold hard reality is that Iowa’s days of playing like the B-Team and getting away with it are over. The Hawkeyes won’t stand a chance if they can’t get the ball in the hoop, and that may require a slightly altered philosophy on offense.

One thing that became increasingly infuriating as Iowa clung to life against Temple was that where the 3 was once the lifeblood of the Hawkeye offense, it now seems more like a distraction from getting good shots. Uthoff let it fly from several feet behind the line on numerous occasions, and Peter Jok deferred from driving the lane for a step-back 3 with a small lead and time winding down.

Uthoff and Jok combined to shoot 5-of-20 (25 percent) from deep, and not to suggest that they set the place on fire inside the arc, but they were better. Taking out 3s, the Hawkeyes soared to 41 percent shooting on 2-pointers.

So it will be interesting to see how the Hawkeyes adjust, but there is a legitimate question if they’ll adjust at all. As has become a habit, nobody really has an explanation for the continued struggles.

If they’re not making shots, do they have a mind to, you know, get a little closer?

“I don’t think about missing shots,” Jok said. “If I miss a shot, I just move on to the next. I had a lot of good looks; they just didn’t go in.”

You always want a short-term memory in your shooters, but you also want a little self-awareness. Jok started the game 3-for-3 from beyond the arc and then continued to “move on to the next”; he missed his next 7, compared with only 2 made 2-pointers on 5 attempts.

So what do Iowa fans want to believe? The Hawkeyes are suddenly a group of marginal-at-best shooters? Or they’re on a monthlong run of absolutely dreadful shooting because that’s just the way the ball bounces?

Whatever the case is, it’s going to need get fixed, as in immediately. Enjoy this first-round victory while you can, Iowa fans, but just know: There’s trouble in paradise.